Featured Articles
September 23, 2010September 28, 2010 831 Views David Hobstetter, Ehrenkrantz Eckstut & Kuhn Architects, Western U.S.
WASILLA, Alaska — It’s no secret that over the past decade the cost of heating fuel has increased dramatically — and nowhere has it been 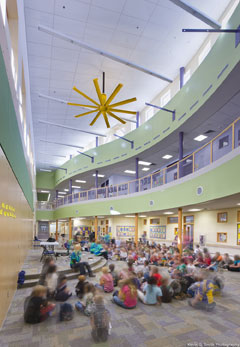 more of a challenge than in cash-strapped schools across the United States.
This cost increase has had some school districts to turning to “heat destratification” as a way of improving heating system efficiency while maintaining student comfort throughout the winter. The use of large diameter, low speed fans has proven to be an effective means in which to equalize air temperatures between floor and ceiling levels, contributing significantly to a decrease in the amount of fuel needed to heat the space, reducing energy bills by up to 30 percent.
Experts say that destratification of the air can have a significant impact on reducing the energy consumption of an HVAC system. The use of a single large diameter, low speed fan, for example, could reduce the heating fuel usage and increase the effectiveness of the ventilation system in the appropriate amount of space using only 75 watts.
With a 1,768-square-foot, 30-foot tall assembly area that gets south-facing sun, the Fred & Sara Machetanz Elementary School in Wasilla brought the element of air movement into its curriculum with the aid of a large fan circulating air throughout the unique multipurpose area. The 12-foot large diameter, low speed fan — powder coated yellow and designed appropriately enough by a company called Big Ass Fans, out of Lexington, Ky. — has aided in the thermal comfort of students and teachers.
“The fan helped improve the indoor environment of the building with a passive strategy of reversing the convection and getting our hot air off the ceiling back down to a floor,” says Jason Gamache, sustainability coordinator with McCool Carlson and Green, the architectural firm that designed the school, based in Anchorage. “This is the exact effect for which engineers designed the fan.”
It was the functional design of lean use of energy that ultimately got the school — located in a mountain valley in Alaska’s southern region only getting five hours of daylight on some days — LEED Silver certification from the U.S. Green Building Council.
In line with LEED certification requirements, says school Principal Thomas Lytle, the crux of the building “had to incorporate natural light and airflow.”
Large diameter, low speed fans also play a large role in improving indoor environmental quality by turning the air in the space over several times per hour ensuring good air distribution. Research conducted by the U.S. Environmental Protection Agency has shown that air quality within academic institutions is crucial to student’s overall achievement. A December 2000 EPA study entitled “IAQ Tools for Schools” found that student attendance “rose 5 percent after incorporating cost effective indoors air quality improvements.” The increased air circulation also helps inhibit mold growth while the gentle, quiet operation of the fan aids in student comfort, further contributing to a successful academic environment, according to the EPA. 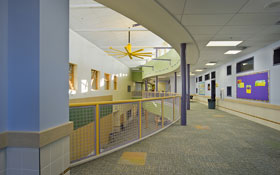 Ranging in size from six to 24-feet in diameter, the principle of large diameter, low speed fans is to move large volumes of air resulting in uniform temperatures without incurring large gusts. Similar to aircraft wings, the winglets at the end of the patented airfoil design help eliminate wing-tip vortices that can induce drag and lower overall efficiency of the airfoils. Working with HVAC systems or on their own, these powerful fans use small horsepower motors to achieve the desired airflow. Maximum operating speed between 60-100 percent is used in the summer months to aid in the evaporative cooling process. In the winter months, fans can be slowed to aid with destratification.
Stratification occurs because hot air is less dense (lighter) than cold air. Since the hot air is lighter, it tends to rise leading to a significant temperature difference of 10 to 30 degrees Fahrenheit between the occupant/thermostat level and the ceiling. Most of this heat will eventually escape through the roof at a considerable expense resulting in wasted energy.
By thoroughly mixing the air within the space, a reduced buildup of heat will occur at the ceiling, resulting in less thermal conduction through the walls and roof and more uniform temperatures throughout.
“Even though the thermostat set-point remains the same in the winter, the heating system does not have to work as hard to maintain the given set point,” says Christian Taber, applications engineer and LEED AP for Big Ass Fans. “By reducing the amount of heat escaping through the roof, it’s similar to turning the thermostat down five to seven degrees.”
Big Ass Fans