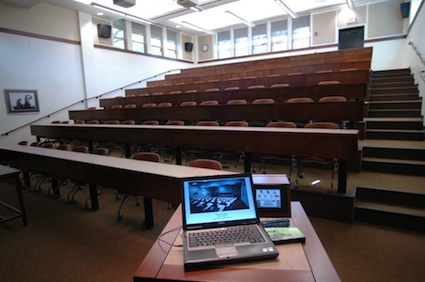 Bill Hall’s Silfen Auditorium, which seats up to 150 people, was renovated in 2008 and brought up to date with tools for interactive teaching and learning, officials said.

The classroom is named in honor of David and Lyn Gordon Silfen, alumni of the class of 1967, who funded the renovation.

KBE Building Corp. served as the construction manager of the project, with Ellenzweig Associates as the designer.

The auditorium is one of the few campus locations that can accommodate a large group and is also used for special events, community presentations and lectures, according to school officials.

Silfen Auditorium was one of the first major construction projects completed after the adoption of a college-wide green building policy in 2005.

The Forest Stewardship Council certified more than 95 percent of the total wood used for the project and 100 percent of the applicable equipment is Energy Star-rated.

All adhesives, sealants, paints, coatings, carpets, furniture and seating are low-emitting materials that reduce indoor air contaminants and more than 63 percent of the construction waste generated on site was diverted from landfills, school officials reported.

The College has also applied for LEED certification for its 10,000-square-foot fitness center, which opened in 2009.

Construction also began this month on the school’s new Science Center, which includes a complete renovation of the college’s oldest building and a large addition, with hopes for LEED certification for the entire project.

"Connecticut College is committed to long-term sustainability, and we are proud to have our green building practices recognized," said Connecticut College President Leo Higdon. "Silfen Auditorium is an important learning space in our community, and its renovation has served as a model for other environmentally-sensitive construction projects on campus."