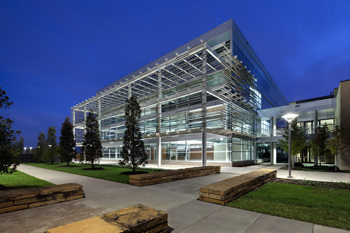 RICHARDSON, Texas — Austin-based Hill & Wilkinson has received the top green building award from Education Design Showcase for the LEED Platinum, University of Texas at Dallas Student Services Building. Only three university projects were selected as 2011 Green Judges’ Choice Winners, with submittals throughout the U.S. This is also the first LEED Platinum project for the entire UT system.

“We are very pleased to have earned this recognition on behalf of the owner and the project team,” said Greg Wilkinson, co-chairman of the Board of Hill & Wilkinson. “Being the only Texas project also makes us proud of our team’s accomplishments.”

This isn’t the only award that the university project has received. The student services building was recognized with the Accessibility Award, presented by the Texas Governor’s Committee on People with Disabilities and Accessibility Professionals Association, and other sustainability and safety awards for the project.

The 74,000-square-foot building has a total of six sustainability awards and the feedback from those at the university is positive and also thankful for the recognition.

“…This recognition reflects UT Dallas’ commitment to sustainability and the talents of an outstanding project team, including Perkins + Will, the design architects,” said Wilkinson.

The construction of the student services building has students appreciating the design as well as taking some credit for the project itself.

“What is most gratifying to me is the fact that this building, which was constructed as an initiative of the university’s student body, has garnered such a significant amount of award,” said Rick Dempsey, associate vice president for facilities management.

The $27.5 million project was completed in just over a year and opened for students in 2011. The three-story building received its latest green building award Dec. 13.

The student services building is a place for students to participate in general enrollment activities, health services, counseling and career center, financial aid and links to other student groups, along with other amenities.

The building’s design was recognized and awarded because of its commitment to sustainability and energy saving design implementation.

The student center has a custom exterior terra cotta louver system that provides an energy efficient shading strategy, set in place to protect those inside the building from the harsh Texas heat, while reducing radiant heat gain and maximizing daylighting and views to the outdoor landscaping. The daylight harvesting efforts helped the building use 76 percent of all occupied spaces with natural lighting and 93 percent of all occupied spaces to have views to the outside.

Those working on the site kept the project area green as well by recycling construction debris. A total of 88 percent of construction debris was recycled — total debris of 1,170 tons and the team was able to divert 1,034 tons from landfills.