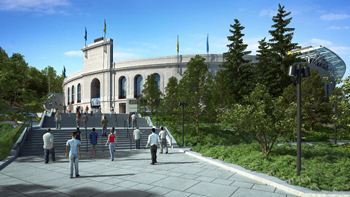 BERKELEY, Calif. — The University of California (Cal) Bears practiced on their new football field for the first time in mid-August and anticipation is already mounting for the home opener against The University of Nevada at Reno Wolfpack on September 1, which will be the first home game at the university since November 2010.

The stadium has been under renovations to address earthquake safety concerns and general improvements. The Bears played at the San Francisco Giant’s AT&T Park last season, and practiced on a university rugby field. The team took an hour or so to test out the new turf recently, but the facility won’t be fully open for regular team activities until around the end of August. The construction crews will finish up some concrete work in the meantime. Workers and their families will be invited to attend a celebration at the September 8 home game, where they will get to watch the game and receive recognition for their efforts.

The university explained the project came about primarily because of a need to renovate Memorial Stadium to account for the fact that it sits on top of the Hayward Fault, where two tectonic plates meet, practically ensuring an earthquake sometime in the future. The new safety features include designing the structure so that pieces of it will move individually during an earthquake, rather than being torn apart. Essentially, different pieces of the stadium will move when the plates under them shift. The project actually involved eliminating 8,000 seats, but the university expects the fan experience to improve with more spacious walkways and restroom facilities. The entire field was actually dug four feet lower than previously to improve visibility from the stands.

The project was led by UC Berkeley civil engineering alumni David Friedman, now the senior principal at Forell/Elsesser Engineers of San Francisco. The firm has been working on various retrofits of the stadium since 1998 and also did rehab work on the Berkeley Civic Center and San Francisco’s City Hall and Asian Art Museum. Design work was handled by a joint team of STUDIOS Architecture and HNTB. Construction was led by locally-based Webcor Builders.

One of the entirely new features at Memorial Stadium will be the artificial turf, which actually has an irrigation system to keep the field clean and cool. The bottom layer consists of crushed stone covered by a layer of rubber pellets and pea gravel, which is mixed with synthetic materials to provide a cushioning effect. The 2.25-inch thick artificial turf is then placed over the top. Sand and rubber are then poured on top. These materials cause the fibers in the turf to stand up like grass and also provide additional padding.

The project received a lot of publicity in the spring, when the Wall Street Journal reported the renovations would cost $321 million, outpacing the university’s planned funding of around $270 million from selling stadium seats. In fact, the school had only collected $31 million in the first three years of advertising the seats. The university expects private endowments and seat-naming rights will provide much of the missing funding. Premium club seats will go for $40,000 or more. UC Berkeley public affairs officer Dan Mogulof explained the university had over $144 million in commitments for seats and that many of them are agreements to pay over time, which is why the university has so little of the money in hand at the moment. Mogulof added that the $144 million in future commitments would cover the debt obligations for the stadium for 26 years. Cal Berkeley officials have repeatedly assured students the bill won’t fall on their backs, as University of California students have already seen massive growth in tuition rates over the last few years as state funding has dried up amid the financial downturn, and the Golden State’s own unique budget saga.

The athletic department hired a professional sales staff in August in an effort to spur sales at the endowment level. Students formerly handled the sales function for the athletic department and worked part-time receiving calls from potential buyers. The new team will aggressively pursue prospective buyers by calling them directly.

Things are really coming together as the season approaches, with 95 percent of the 63,000 seats already bolted into position. The eight-story press box is also very near to completion. Work on the new Cal Hall of Fame will continue until next season.

Cal will be relying on senior quarterback Zach Maynard and his half-brother and number one receiver Keenan Allen to make big plays all over the new turf this year. Hopes are running high that a return to their home field can help the Bears eclipse their 7-6 record from 2011.