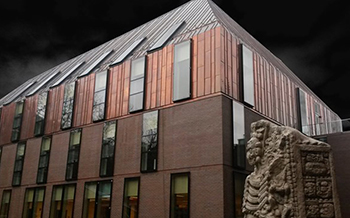 CAMBRIDGE, Mass. — Harvard students and staff moved into the newly renovated Tozzer Anthropology Building in Cambridge in May, about one and a half years after construction broke ground on the project. The renovated facility replaces the Tozzer Library in an effort to combine the social anthropology and anthropology archaeology programs at the school.
The $12 million project included a complete renovation of the 24,800-square-foot building as well as a two-story, 10,000-square-foot addition that is now dedicated to anthropology. Kennedy & Violich Architecture (KVA) served as the architect on the project, while Consigli Construction served as the builder. Both companies have offices based in Boston.
The main goal of the project was to strengthen the sub-disciplines within the department by bringing them into one main location. Plus, the role of traditional library is changing into more of a collaborative space, as opposed to being used as a place for book storage. As one of the world’s largest anthropology research libraries, the facility still houses about 54,000 volumes of books on two floors, but it also features several design elements that bring the facility up to today’s standards.
The existing building was stripped to its structural steel and rebuilt to LEED Gold standards. The new designs mimic the adjacent Peabody Museum of Archaeology and Ethnology with a brick façade and copper roof. Working with the university and anthropology department faculty, staff and librarians, the KVA design team created smart classrooms, collegial spaces, faculty offices and a refreshed anthropology library to house the Tozzer anthropology collections.
An additional entrance was added to the rear courtyard, and the building now links directly to the Peabody Museum. The new program is organized around a central birch wood atrium, which extends to the fourth story and includes a social gathering space on the second floor. Offices, classrooms and informal gathering places surround this living space, which brings daylight into the building, creates visual relationships between floor level, and provides acoustic treatment. The light well circulates tempered air as part of an innovative energy-saving ventilation system.
The design challenge was creating space for a 21st century anthropology curriculum in the existing 1971 building footprint, campus infrastructure connections, and steel and concrete structural system, according to KVA. Plus, the 1971 three-story brick envelope could not be re-used due to mold and vapor barrier problems in the original construction. As such, the design consists of a digitally corbelled brick detail at the new entry that is directly linked with the overall geometry of the building massing, with each brick course shifted from the course below in parallel with the building structure, according to KVA.
The use of brick in the building’s design earned the project a Best in Class award at the 2014 Brick in Architecture Awards organized by the Brick Industry Association. Selected by an independent panel of judges, 40 winners were chosen out of 150 entries from both the United States and Canada.