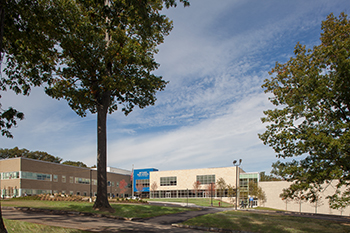 METHUEN, Mass. — Not long ago, the future of Massachusetts’ Methuen High School was in jeopardy. Although the school’s original 1970s-era building was well designed and solidly built, the antiquated open classroom design did not provide an optimal learning environment. Additionally, many areas within the school did not meet ADA standards, putting it at risk for losing accreditation. However, a soon-to-be-completed $75 million renovation and expansion, designed by Finegold Alexander & Associates of Boston, has given the school a much brighter, safer and more secure future.
Designers and school officials had a number of different goals for the project, which comprised 264,000 square feet of renovation and a 105,000-square-foot addition. Primarily, the new school had to offer expanded teaching tools and new opportunities for student learning and development.

To meet this goal, the new 21st century Methuen High School features an entirely new wing for art and music classes. The highlight of this new addition is a 750-seat auditorium with a professional-level stage, technical gallery and catwalks, as well as tiered side boxes and flexible seating. Instrument practice rooms will also be included.

A well-equipped new media center — which Superintendent Judy Scannell called “the showpiece of the new renovation” in a video highlighting the project’s progress — will be packed with new technology. The school will also offer production and graphic design studios, as well as a glass-encased reading room. Further upgrades have been completed on student locker bays, and life safety improvements to the field house and ice rink ensure all facilities meet ADA code. 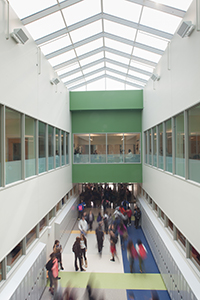 The school’s new addition houses a modern kitchen, serving area and cafeteria, as well as physical plant infrastructure. Where the original school offered just four science labs, the expansion now accommodates 17 new, state-of-the-art laboratories. A catwalk will link different areas of the school, and a new entrance will serve the auditorium, field house and ice rink.
Skylights line the school’s new primary entryway, infusing it with natural light to improve the student experience and reduce energy use. This distinct and welcoming entryway gives the facility a clear identity and clarifies wayfinding. Lively colors and finishes further enhance the interior.

Consigli Construction, with offices across New England, broke ground on the project in July 2011 and is wrapping it up this month. The renovation and addition project was largely complete while the school was occupied using the Construction Manager at-Risk method.
Consigli devised an aggressive, yet finely tuned, two-phase construction process to accommodate the nearly 1,500, 10-12 grade students who remained in the building throughout the project. This involved relocating the school’s entire 9th grade class to a nearby middle school and shifting the three remaining grades throughout the building during construction. The firm also created temporary classrooms, labs, offices and administrative spaces within the schools’ existing kitchen area. Two temporary modular buildings were brought onto the campus to serve as science classrooms.
Additional members of the project team included Engineers Design Group Inc. of Malden, Mass.; RDK Engineers with offices in Massachusetts and North Carolina; ART Engineering Corporation of Worchester, Mass.; and Nitsch Engineering Inc. of Boston.