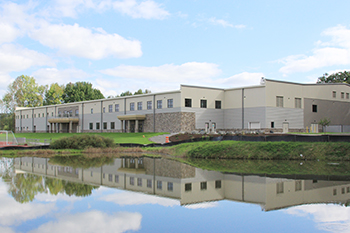 Phase I of the project focused on the existing Burke Field, which received an artificial turf makeover. Phase II concentrated on construction of the baseball and softball stadiums, which were dedicated in the spring of 2013. The state-of-the-art field house was constructed during Phase III and took roughly a year to complete.

"Walking into this facility today I had to pinch myself, I could not believe I was in Allegany County. This is a game changer,” said State Senator Catharine Young (R,C,I-Olean) in a speech at the ribbon-cutting ceremony. "We all know the rigors of competing in sports prepares our students for life, but when you couple that with education, that is what is going to change our future here.”

Kenneth R. Gay of Keystone Associates in Binghamton, N.Y. served as the project architect. Keystone Associates also conducted a feasibility study in early 2012 to select the complex site, which is adjacent to both Burke Field and the existing Alumni Athletic Complex. The firm began the design process in spring 2012 and construction on the facility in August 2013.

At the initial groundbreaking ceremony, Houghton College President Dr. Shirley Mullen noted that the impact of the new facility would reach beyond the school’s athletic department.

“The rest of the community and every student at Houghton will benefit,” Mullen said. “It will be a great facility to encourage wellness, physical fitness and the wholeness of personal development that is a hallmark of the Houghton experience.”

The Kerr-Pegula Athletic Complex was made possible by a generous $12 million gift from the Kim (Kerr) and Terry Pegula family, which has long promoted and supported athletics across the spectrum. The family currently owns the National Hockey League Buffalo Sabres as well as the team’s American Hockey League affiliate the Rochester Americans. The Pegulas also made headlines in September 2014 when they placed the winning bid to purchase the National Football League’s Buffalo Bills.