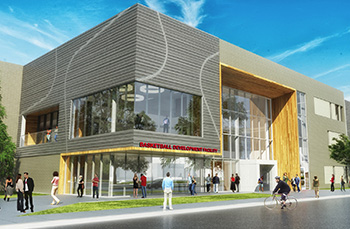 HOUSTON — The University of Houston Department of Intercollegiate Athletics will soon be able to take advantage of the new Houston Basketball Development Facility, designed by Kansas City, Mo.-based DLR Group and Houston-based Page, which will provide a new space for student athletes to practice, train and study for classes. Austin, Texas-based Austin Commercial, serving as the construction manager, began construction in September on the $25 million facility, which is scheduled for completion in August 2015.

School Construction News spoke with Don Barnum, AIA, national sports leader for DLR Group, about the design of the 52,923-square-foot facility and what it means to the University of Houston basketball programs.

Q: Why do you think the new facility is necessary for the University of Houston basketball programs?

Barnum: Today, every collegiate sports program must compete to recruit and then retain the highest-level student athletes and coaches. Training facilities, stadiums and arenas are all an indication of the commitment of the university to athletics and to the development of the student athlete. A dedicated player development facility, like the one DLR Group is designing for the Houston Cougars men and women’s programs, optimizes the transitions between practice, strength training, physical therapy, film review/coaching and studying for classes. Every minute of student athletes’ time is valuable, and all of these activities will take place within the new player development facility.

Q: What are the key design elements involved in the new facility?

Barnum: The new facility wraps around a corner of the existing basketball arena. This element provides a new public face for the historic Hofheinz Pavilion with a dynamic three-story entry lobby that will be highly visible on campus. The player development facility is a three-story building, housing all team and coaching spaces. It is flanked on each end by a dedicated practice court for both the women and men’s programs. The design includes a comprehensive strength and conditioning space and sports medicine facilities adjacent to the practice courts. The second level of the facility is only accessible by student athletes and athletic staff. This area houses locker rooms and film, study and lounge areas for the student athletes. A coaches’ office suite comprises most of the third level with views into the practice courts.

Q: What are some trends in basketball facility design that were incorporated into this facility?

Barnum: Again, time is precious for student athletes so the Houston Basketball Development Facility contains all the training and support spaces that both players and coaches need. A key feature is that the facility has identical facilities for both the men and women’s programs with dedicated practice courts for each program. Time is valuable, and scheduling doesn’t allow for sharing of court space. There are academic support spaces on the second level and theater-style film rooms for each team. There are full-service strength and conditioning and sports medicine facilities within the space instead of being located at a central campus location.

Q: Was there any student or staff feedback involved in the development of this facility? If so, what was it?

Barnum: The design of these development facilities must be a collaborative effort. It is essential to meet the needs of coaches and student athletes who will use the facility. Houston coaches, administrators and student athletes were involved in every aspect of the design. The coaches defined how they want to instruct in the locker room. The outcome of that is the design has lockers on three sides and the fourth wall has video display, white boards and tack boards for instruction and pre-game preparation. The coaching staff also weighed in on the court design and layout and, of course, their office space — all of which informed our design. Similarly, the strength and conditioning coaches and staff were instrumental in the layout and equipment selection in the weight room, and the training staff defined layout for sports medicine and hydrotherapy.

Q: How is this project different from other ones you’ve completed in the past?

Barnum: The culture of every university campus is unique. The Houston athletics administration defined the character and message they want the facility to portray for their basketball program and the University of Houston. Our role as designers is to make that vision a reality. The player development facility is designed to honor the program’s history and to provide a training and practice facility to set it on a course for future success. Everything about it is specifically designed for and unique to the University of Houston.