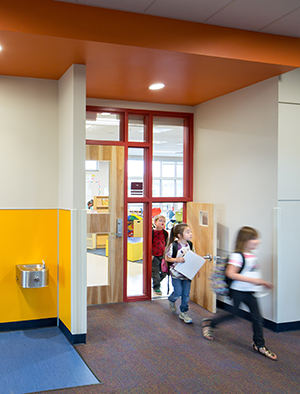 IGNACIO, Colo. — The small town of Ignacio is located in the Southwestern region of Colorado, approximately 325 miles from Denver, and is surrounded by the 1,000-square-mile Southern Ute Indian Reservation. The location of the school district has made its population tri-cultural, including Southern Ute, Hispanic and Anglo heritages.

In 2010, Superintendent of Ignacio School District Rocco Fuschetto set out to change the district and surrounding community forever. The district had been saddled with below-standard performance ratings, lack of space for educational programs, and was losing students and staff to neighboring schools. Fuschetto invited RTA Architects’ (RTA) Stuart Coppedge, AIA to tour the site and to inspire ideas for change. Soon after, RTA was appointed lead architect with a master plan containing four different options for implementing a new design for the district. Thus began a five-year-long process that would create a unified school district with three 21st century learning environments, state-of-the-art athletic and art facilities, an administration building, a transportation facility and an entirely changed community.

The school district’s goal was to increase educational programs, resources and overall student performance. Fuschetto wanted students to come to school to learn, rather than only for athletics. He also wanted to instill pride in students, staff, and community members, and to create a well-balanced curriculum.

In October 2011, a public vote was held for the district to receive a bond for the proposed master plan that initially resulted in a tie. However, a recount revealed that a single ballot had been placed in the wrong envelope. This led to a one-vote bond election victory and the ability to start the project.

Initially, Ignacio School District owned four main pieces of land. The first parcel held district-owned rental properties, the second held the 4-6 school, the third housed the PK-3 elementary school, and the fourth held buildings for the grades 7-8 middle school and the grades 9-12 high school. The four options presented in the master plan by RTA included a variety of well-researched renovations, upgrades, additions and new builds for these parcels. After many discussions, an option was chosen that required using the first piece of land for a brand new 6-8 middle school, renovating the existing 4-6 building into a PK-5 school, and renovating the existing combined middle and high school buildings into a single, unified high school campus. RTA and the district chose not to use the existing PK-3 elementary school in the new layout because of its poor condition. The end result is three distinct campuses for an elementary school (grades PK-5), middle school (grades 6-8), and high school (grades 9-12). This option allows for potential growth, while providing athletic facilities at the middle and high schools and achieving the greatest flexibility for future space developments. 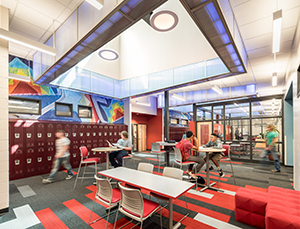 The massive changes made to Ignacio School District produced dramatic results. By keeping the best parts of the existing buildings, repurposing them and adding necessary additions, RTA was able to give the district the highest value for its hard-won dollars. The design also stayed true to the original master plan. With the help of several design advisory groups comprised of designers, staff, students, teachers and community members, the project has also allowed for the implementation of more leading-edge educational programs. For example, the district hopes to grow the performing arts program with the new state-of-the-art high school auditorium and students can now receive credit from nearby Fort Lewis College.

RTA’s in-depth structural analysis and energy-saving strategies have even earned Ignacio LEED Gold certification. Fuschetto noted that the school’s gas bill for March was under $200.

Ignacio Bobcats also have a newfound respect and love for their educational and sports facilities. RTA Associate Mike Riggs said, “The new middle school and renovated elementary and high school buildings give students hope, inspiration and something they can claim as their own.” The middle and high school’s athletic facilities have also helped to improve the Ignacio School District experience by allowing the Bobcats to host regional and local tournaments with their CHSAA-approved fields and gyms.

The district is also well balanced and well rounded as vocational programs were expanded and improved alongside educational and athletic programs. This allows students with a variety of goals to be prepared for wherever life takes them. Fuchetto said, “RTA Architects understood the needs of the district and community so they captured those needs and feelings in the design of every building. The community should be very proud because without that one vote, nothing would have been accomplished.”

Stuart L. Coppedge, AIA, LEED AP led RTA’s Ignacio work as principal-in charge. He is the 2016–2017 national treasurer of the American Institute of Architects and serves on the Colorado Springs Downtown Review Board and the Board of Directors of Atlas Preparatory School. He can be reached at: stuart@rtaarchitects.com.