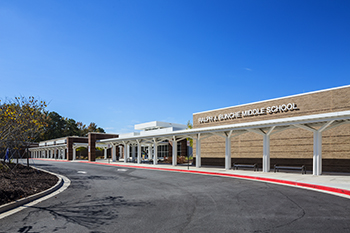 While the majority of the building is devoted to more than 50 classrooms, it also offers each individual grade three dedicated science labs and one dedicated computer lab. The school’s media center, previously located in the basement, was moved to a sun-drenched spot that offers a view of the outdoor courtyard. The newly redesigned cafeteria features a dramatic exposed concrete waffle-slab ceiling and food court-style serving lines.

The school’s new administration area features high ceilings and porcelain floor tiles, and leads to a courtyard that divides the fine arts and assembly spaces from the classrooms. A brand new gymnasium was construction as well as a state-of-the-art, 520-seat auditorium with a full stage. An acoustically designed music suite, fixed audience seating, a sound system and theatrical lighting join band, choral, orchestra, dance and art spaces.

Outside, the project team fully reconfigured the existing parking, drop‐off and bus areas and added a storm water management system and landscaping. The design includes hundreds of new trees and shrubs that create an arboretum-style environment. New softball and football fields were included along with a 400-meter track.

The Last Planner System centers on pull planning sessions, in which all “last planners” meet to determine major milestones. By working from end to beginning, any “fluff” built into a schedule by subcontractors is all but eliminated, according to a statement by JE Dunn. The sessions allowed subcontractors to identify and address any possible impacts, while weekly work plans helped keep them on track to reach critical milestones.

“The Last Planner system allows us to implement the schedule in a way that is more innovative,” Jackie Avello, project manager with JE Dunn Construction, said. “When problems like rock and soil and waterproofing happen, we keep the subcontractors in the loop and [ask how we can revamp our game plan]. As a result, there is a higher trust level between the trade partners as well as the JE Dunn Construction team and the architects.”

Bunche Middle School reopened for classes in August 2015 and the school community hosted an official ribbon-cutting ceremony in October 2015.