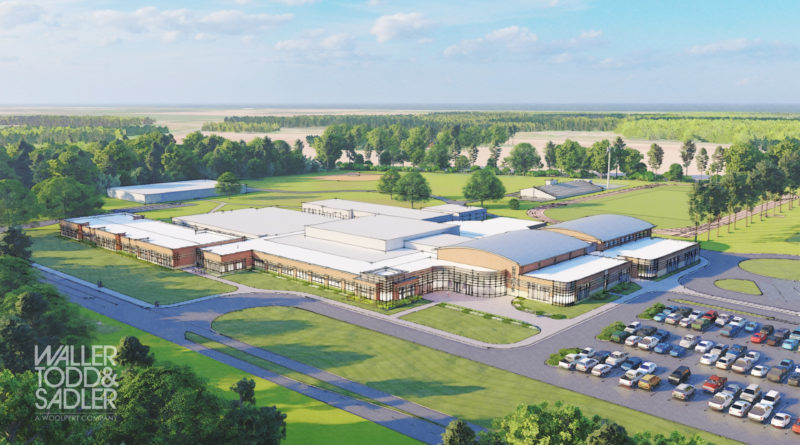 The plans for the $40 million project call for over 43,000 square feet of the existing school to be demolished, another 55,000 square feet renovated, plus an addition of 78,000 square feet of new classroom and other spaces. A new dedicated wing for grades 6 to 8 will stand alongside another wing redesigned specifically for students in grades 9 to 12.

External upgrades include a dedicated bus loop and delivery bays for trucks to bring in supplies, as well as smoothing traffic flow.

Both the middle and high school will each have their own gyms, classrooms and locker rooms, but they will share a great many elements of the re-envisioned campus. The combined schools will have shared use of an auditorium, common areas and what are being called “elective areas” that serve multiple purposes. The kitchen and cafeteria will essentially have mirrored functions such that the cooking staff can alternate between serving food to either the middle or high school students as needed. Also, the two cafeteria spaces can be merged for use in larger events.

Modern furniture and fixtures will be added to the redesigned spaces. Waller, Todd & Sadler will also update the school’s Career Technology Education building such that it can be utilized for not only middle and high school students but also members of the surrounding community looking to improve their resumes. New programs to be added to the Career Technology Education center include computer science, agriculture and aquaponics, which will complement the programs already offered there in business and industry.

Waller, Todd & Sadler has been working with the county and school board since March of 2019 on a plan to combine the middle and high school elements at the location.

“Since the former stand-alone high school absorbed middle schoolers over time, there is not a strong sense of community for either school,” Maureen McElfresh, Woolpert architectural project manager, said in a recent statement. “By strategically renovating the existing facility per school, staff and public feedback, the division can provide sixth- through 12th-grade students with distinct, appropriate and state-of-the-art educational amenities, while promoting the identity of each school and the community as a whole.”

When finished, the school’s footprint will increase from its current 110,000 square feet to 145,000 square feet overall. A general contractor has not yet been selected, but construction is due to begin early next year. The existing school facilities will stay open during modernization, and the district is aiming to have the renovated facilities fully open by the summer of 2024.

Waller, Todd & Sadler, a Woolpert Company, employs over 1,100 employees and has 42 offices in three different countries.