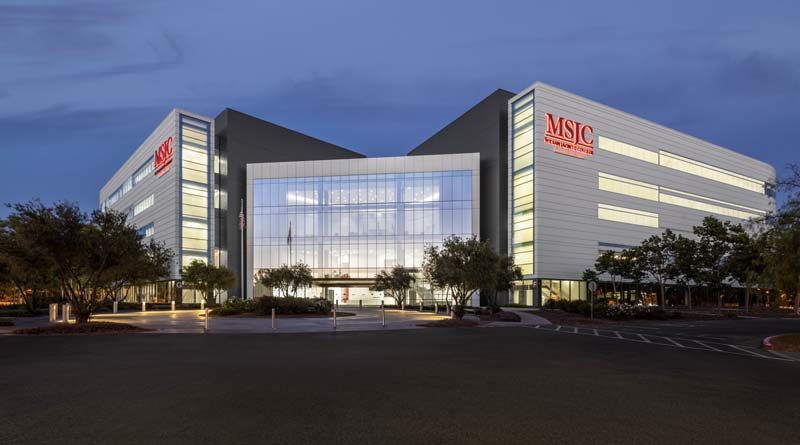 TEMECULA, Calif.—General contractor C.W. Driver has completed the buildout of the new Temecula Valley Campus for Mt. San Jacinto College. It is the first permanent campus for higher education to be completed in Temecula, which is known for its wineries. C.W. Driver worked in conjunction with designer 19six Architects.

The 350,000-square building is meant to grant greater access to potential students throughout southwest Riverside County, as well as address a deficit in classroom space across the district. The 27-acre campus, which is located at 41888 Motor Car Parkway, is the same size as Mt. San Jacinto’s Menifee Valley Campus, where over 15,000 students currently study.

Rather than building the new campus entirely from scratch, the $60 million project entailed retrofitting two five-story office buildings such that they will function newly as an academic environment. In addition to addressing seismic concerns—of particular importance in Southern California’s earthquake-prone environment—the older buildings’ rooms had to be converted from business-oriented to academic space.

The two former office buildings were constructed in 2008 and were owned by Abbott Laboratories. As part of the seismic retrofit, 445 tons of structural steel were used to reinforce steel columns on all five levels of the buildings as well as to reinforce the existing subsurface foundations. Each steel member was 30 feet long and weighed 1,500 pounds.

Mt. San Jacinto purchased the two buildings for $56 million in 2018. Funding was largely provided by moneys from Measure AA, a $295-million bond measure that voters passed in 2014 as a way to update and increase classroom space.

The new campus features 22 classrooms, six science labs and five computer labs. Amenities inside the new school include a dining hall, bookstore, welcome center, veterans resource center as well as support services. There are also areas specifically for faculty use, a board room, study group rooms and conference spaces.

“The team at C.W. Driver Companies was proud to partner with Mt. San Jacinto College to develop a convenient, accessible and quality educational facility for local students,” Dave Amundson, project executive at C.W. Driver Companies, said in a recent statement. “By leveraging decades of experience in higher education and tenant improvement construction, we were able to successfully execute a seismic retrofit and complete upgrade resulting in a safe and modern environment for students to learn and pursue their passions.”

Added Beth Gomez, vice president of business services at Mt. San Jacinto College: “The ambitious undertaking of repurposing a multilevel commercial space for educational needs was both cost-effective and time-efficient thanks to the team at C.W. Driver Companies. The new campus and innovative design enables Mt. San Jacinto College to further our mission of transforming learners, communities and lives by expanding our footprint and accommodating more faculty and students.”

“With the expertise of C.W. Driver Companies, we have realized our vision to serve the residents of Temecula and the surrounding communities by establishing a permanent residence for MSJC in Temecula Valley,” said Dr. Roger Schultz, superintendent and president of MSJC. “This state-of-the-art facility will become the launching point for generations of local students who aspire for college and career success.”

Mt. San Jacinto College is just one of California’s more than 100 community college systems, which train people for careers as well as prepare them to transfer to four-year institutions. C.W. Driver is also serving as construction manager for MSJC’s STEM Science and Technology Building and the Building 200 Renovation and Addition projects at its San Jacinto campus.