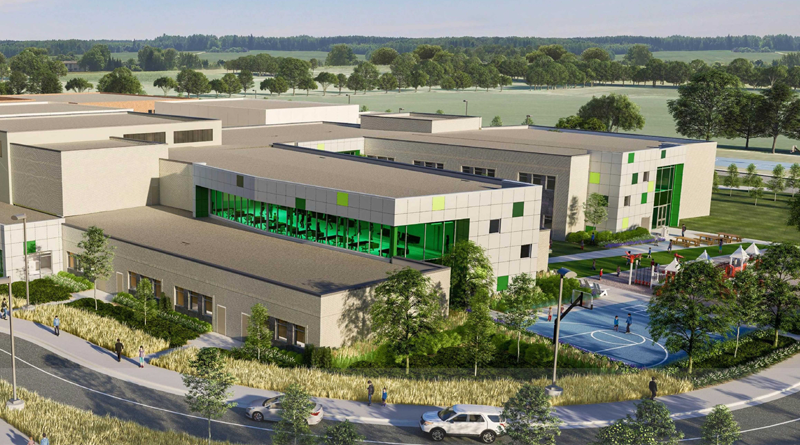 PIPESTONE, Minn.—Construction management firm and contractor Kraus-Anderson has unveiled its work on a new $30 million elementary school addition, which is known as PK-5. PK-5, also called Pipestone Elementary, adds 85,940 square feet of educational space to the adjacent middle and high school buildings, all of which are now joined together as a singular entity. This brings all 1,000 of the district’s public-school students together under one continuous roof, including 500 elementary students who had heretofore been divided up between two older elementary school buildings.

The two-story educational facility, designed by ISG Architects, features an expanded kitchen and cafeteria area that will be able to better serve the increased complement of students. Furthermore, ISG and Kraus-Anderson had to work on redesigning the parking area at the school to accommodate more cars, as well as envision a main entryway point for the school, which is meant to be a central point of access as well as better tighten up security.

The construction work was funded thanks to a 2019 district bond referendum. Cash from this voter-approved windfall is also going toward an upgraded gymnasium that can be sectioned off for separate events. The money was also needed to build the latest technology-enhanced classrooms as well as offices for staff and administrators. PK-5 also features “flexible” learning spaces whose uses can be changed up as needed.

Tyler Kaczmarek, Kraus-Anderson’s project manager, said that the upgraded school facility will help students of all ages as they go through their academic careers.

“We are deeply grateful for the overwhelming support from the school district, board and the local community, whose dedication to youth education made this project possible,” Kaczmarek said. “Because of that support, students can thrive in an educational setting built to strengthen and enhance young minds.”

Kraus-Anderson has continued its various educational work while keeping at the forefront safety measures needed in the era of covid-19. Accordingly, the contractor has implemented strict social distancing requirements at the PK-5 construction site, as well as ensured that the highest safety standards are being adhered to onsite. PK-5 is among the contractor’s slate of K-12 educational projects meant to be finished ahead of the winter weather.

Kraus-Anderson was founded in 1897 and is headquartered in Minneapolis. The company’s work entails construction management, budget analysis, real estate development and working with mortgage and realty consortiums.

In addition to its HQ in the Twin Cities, Kraus-Anderson operates regional Minnesota offices in Duluth, Bemidji and Rochester. The contractor also has other outlets in Bismarck, North Dakota, and Madison and Milwaukee in Wisconsin.