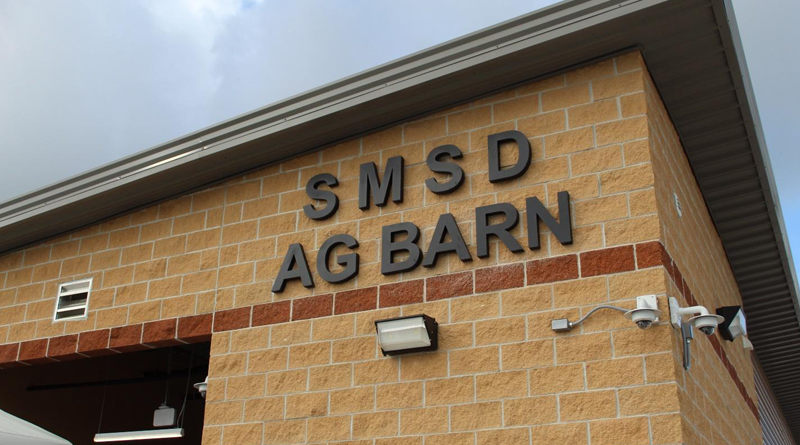 The 3,000-square-foot facility will teach students how to raise and care for farm animals. Photo Credit: Joshualee Vivar

STAFFORD, Texas—After years in the planning, the time has come to reap the benefits of the Stafford Municipal School District’s (SMSD) new agriculture building. The half-decade-long dream became a reality recently as part of a ribbon-cutting ceremony held at the new building, which is located at 1001 Constitution Ave.

The $1 million, 3,000-square-foot agricultural building, designed by Smith & Company Architects, will teach students how to raise and care for farm animals. The high school students will then take said animals to competitions such as the Fort Bend County Fair and the Houston Livestock Show and Rodeo.

As designed by Smith & Company, the agricultural building consists of concrete blocks topped with a metallic roof. The building contains stalls for animal care, office space, grazing areas for the cattle, as well as fans to keep the animals cool in Lone Star State heat. At these and other areas inside the building, students will take courses in not just agriculture and horticulture but also in natural resources and food management. Additionally, elementary and middle school students within SMSD will be able to observe farm animal husbandry being practiced by high school students.

The new agricultural campus replaced an older barn that stood on the same site, and which featured adjacent yards. Both the building and the yards needed to be demolished to make way for a campus access road.

Via a poll of students, the street adjacent to the new building is to be renamed Barnyard Boulevard, which was approved by the SMSD Board of Trustees.

“The new facility is great for the District’s Agricultural Science program and our community,” Fleming said in a recent statement. “It will allow students the opportunity to apply skills and concepts they are learning in the classroom in a real-world setting.”

Added SMSD Superintendent Dr. Robert Bostic: “It’s a gift and reality to have an expanded and upgraded building. This is truly a benefit for our students.”

Deborah Nordt, SMSD’s director of college and career, said that agricultural programs allow students to develop patience and responsibility that can be translated later into the job market.

“In addition to feeding and caring for animals, through Animal Science projects, students learn about animal health, nutrition, and physiology,” she said.

In a follow-up statement emailed to School Construction News, LAN Vice President JP Grom said, “One of things that was always top of mind during construction was that work was being completed on an occupied campus. As always, work had to be done safely and efficiently—the facility also had to be restored quickly so students could move their project animals back to showcase them.”

LAN, which is based in Houston, falls under the umbrella of the LEO A DALY banner, and employs over 300 people throughout the United States. LAN has several times been ranked as one of the “Top 100 A/E Firms” by Engineering News-Record.