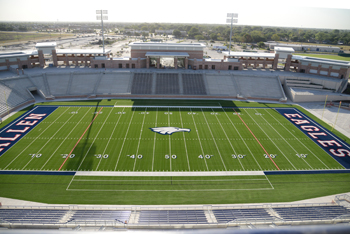 ALLEN, Texas — Everything is bigger in Texas, and Allen High School (AHS) serves as a prime example of just how big the state can build — and just how much they can afford to spend. AHS, in Allen, Texas, will unveil its new $60 million stadium in the coming weeks, in time for the first game of the season. The new stadium is the fourth largest high school stadium in the country, with a seating capacity of 18,000 guests.

The previous stadium was built in 1976 and included 7,000 seats. As the fans continued to pile into the stadium, the district added 7,000 temporary bleachers each year at a cost of $250,000 per year. The need to expand was necessary in order to hold the school’s current fan base, including 8,000 (sold-out) season ticket holders. To solve the problem and improve the facility, the district hired McKinney, Texas-based Pogue Construction as the general contractor and Houston-based PBK Architects, who specialize in athletic facilities. The team worked closely with the school throughout the project.

“When we started planning the stadium, we wanted to make sure we offered the best facility possible for the fans of Eagle football,” said Steve Williams, Allen Independent School District (Allen ISD) athletic director. “They have had to put up with the lack of seats and crowding at the old stadium for a long time.”

The stadium sits on approximately 72 acres and includes more than just a turf field. The new stadium includes a state-of-the-art press box that features three floors: The main level is primarily a film deck with areas for scouts and athletics staff; the second floor serves the needs for stadium operations and media support; and the third floor is designated for coaches, hospitality and a judges’ area for band competition.

Although football games will be the focal point at the new stadium, other athletic team facilities will also be located in the stadium, including a practice area for the men’s and women’s golf teams, featuring nets below the home stands and a simulation area to practice. Also at the stadium is a 5,800-square-foot wrestling practice area and locker room on the home side, as well as a large weight room that will be used by a number of student athletes.

When football is not in season, the stadium is designed to accommodate soccer games with dedicated line markings, and the field can also be utilized for marching band competitions. The district also plans on conducting the 2013 AHS graduation ceremony at the stadium, as well as possibly hosting a concert or event in the spring.

“We respect the fact the facility first serves Allen ISD students,” said Karen Cromwell, tourism manager for the Allen Convention and Visitors Bureau in a statement. “But we are also excited to have Allen ISD and Allen Eagle Stadium as partners in attracting events to the City of Allen, many of which will have a positive impact on Allen students.”

The stadium will also receive some airtime when the NFL Network hosts the college all-star game “Texas vs. the Nation,” in late January at the new stadium.

Fans will experience many new memories at the stadium, including less wait time at the entrance, concessions, as well as the restroom. The former stadium was unable to accommodate the thousands of fans, which made for unpleasant lines and sometimes even missing highlights of the game. The convenience of the new stadium already has fans cheering, as the design includes six entrances; a few steps up from the previous one gated entrance.

“Instead of one main entrance, fans will be able to enter through six gates and a plaza around the stadium will allow crowds to move more freely. Having parking on the same property will also be more convenient and much safer for large crowds,” Williams said.

The new stadium is sure to be a welcoming “nest” for Allen Eagle fans and athletes, alike. The team will play the reigning state champions, the Southlake Carroll High School Dragons and is expected to draw an extremely large crowd.

“We were looking to open with a game that would fill the new stadium,” according to AHS head football coach Tom Westerberg. “I think we found one with the number one ranked team in Texas. Like Allen they bring a big crowd and it should be fun. The last time we met, we played in front of 42,000 fans in Cowboy Stadium.”