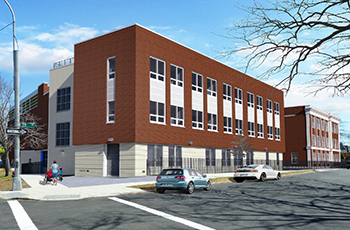 The architectural firm of John Ciardullo P.C. (JC) of New York and Hackensack, N.J., and general contractor E.W. Howell, with offices in Manhattan and Plainview, N.Y., are designing and constructing the new addition, respectively. When complete, it will help accommodate growing enrollment in the Dorothy Bonawit Kole School, which currently serves more than 1,100 students in grades K–8. The New York City School Construction Authority (SCA) will manage the project’s design and construction, and the project will be financed by the New York City Department of Education.

“This sorely needed addition to P.S./I.S. 49 is a true investment in our children and our community,” Council Member Crowley said in a statement. “New classrooms, including ones with computer and science labs, will give our local students the resources they need to build a strong foundation.”

The three-story, 26,000-square-foot addition will house 13 regular classrooms, two special education classrooms, three resource rooms, a medical suite, and an exercise room as well as an expanded cafeteria, according to a statement by JC Principal John Ciardullo, RA. The new building’s contemporary architecture will also reflect the exterior of the 2009 expansion, also designed by JC, and of the original school erected in 1933.

Further, the addition was designed in accordance with the NYC Green Schools Guide and Rating System, which specifies energy efficiency and healthy environment requirements as well as sustainable architecture and construction practices for New York City public schools, according to a statement by E.W. Howell Project Manager Robert Isbit.

The carefully planned addition will feature a partial basement, concrete foundation walls and footings, a structural steel frame, brick and masonry exterior walls, and a glass-and-aluminum curtain wall section. It will mirror the 2009 expansion, reflecting — in a modern interpretation — the architectural vocabulary and window rhythm of the original 1933 school building. The addition’s exterior wall will include red and off-white brick. A three-story high curtain wall section will frame windows at the termination point of hallways.

During construction, crews will partially remove an exterior wall of the 2009 expansion in order to seamlessly connect its corridors on all three floors to the new corridors within the addition as well as to the current main lobby. An existing cafeteria will be completely renovated and expanded into the new addition in order to accommodate the expanded student body. As part of the project, the team will also resurface the school’s play yard.