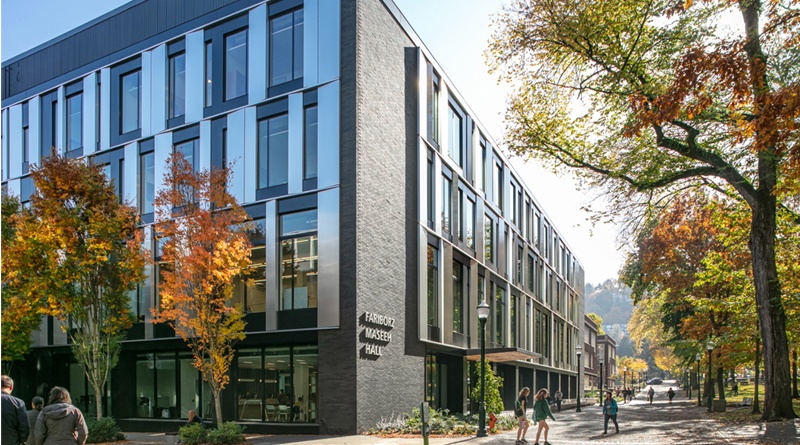 PORTLAND, Ore.—A recent transformation at Portland State University has given new life to an outdated structure, infusing a 1960s venue with natural light and flexible spaces and resulting in an instant hub of campus activity.

The task was to transform the outmoded, fortress-like Neuberger Hall (now named Fariborz Maseeh Hall) into a modern, interactive, light-filled academic hub. The five-story building was originally built in the Brutalist-style, a common campus aesthetic which reflected the pragmatic and inwardly focused buildings of that era. A half-century later, these buildings represent the antithesis of the open, flexible environments called for today. Evolving this building to meet the current needs focused on three key strategies: 1) re-centering the design to the user—the students, faculty, community members, and others who use the building; 2) prioritizing life-cycle and life safety upgrades to the building as a whole; and 3) engaging with owners, contractors, consultants and subcontractors in collaborative, fine-grained decision-making that preserved as many opportunities as possible to support all Portland State University students.

The design concept repositions the building—which functions as a central student hub with classrooms, lecture halls, student services, and faculty offices—through a series of interventions, renovations, and expansions. The result is an engaging, open, and humane experience. With an emphasis on access to daylight and connections between indoor and outdoor spaces, the 250,000-square-foot building now enhances campus function, while better connecting and responding to its urban setting.

The original building was completed in two phases, 1961 and 1969. The two elements are now joined by a common floor plan, while their distinct exterior appearances are preserved. Through a rigorous programming exercise, the removal of 20,000-square-feet of floor area for the light well reduced only 3,000-square-feet of assignable space, while improving program efficiency and flexibility with the additional floor area at the interior with access to daylight. Exterior facades were upgraded through new curtainwall systems. That increase visibility while enhancing energy performance.

A new central light well brings daylight into the heart of the building, and a more transparent facade provides visual connectivity to the outdoors. The new floor plan now provides students, faculty, and staff with enhanced opportunities for cross-pollination. Improved ground floor program distribution also now provides visual and physical connections between the plaza and park amenity spaces and expands opportunities for more student activity and interaction outside of the classroom. The physical connections are improved through a continuous accessible floor plan with full ADA access and enhanced way finding. Previously closed-in hallways and circulations now have unobstructed line of sight between the building’s eastern and western perimeter.

By renovating Fariborz Maseeh Hall rather than demolishing and rebuilding, the team was able to preserve the embodied carbon of the building and substantially reduce carbon emissions. Together, the combination of replacing all windows with high performing substitutes and the increased daylight into the building reduces the building’s energy demand by 25% from the CBEC baseline model of buildings of similar size and use.