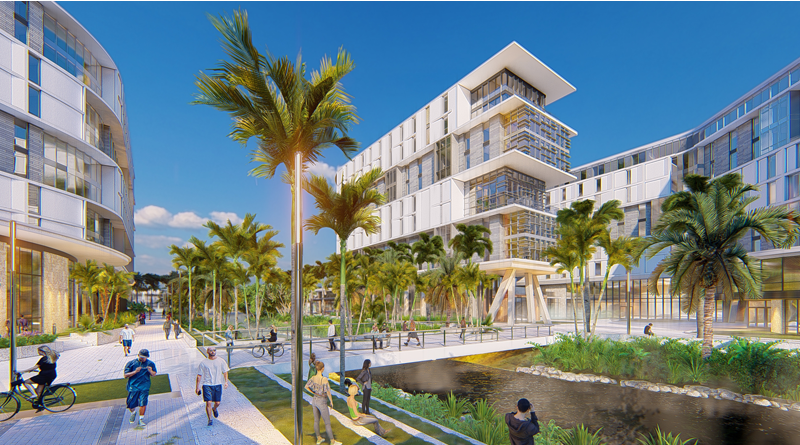 Centennial Village will be home to hundreds of first-year Miami students upon its debut. Photo Credit: VMDO Architects & Zyscovich Associates

CORAL GABLES, Fla.—A new village for student living is coming to the University of Miami in Coral Gables after construction delays related to the covid-19 pandemic. Construction on the Centennial Village was first announced in January 2019 and was ongoing until the shutdown of March 2020.

But 2022 appears to be the year the residential complex will finally be realized at the Florida college. In the months ahead, the existing Hecht Residential College is due for a date with the wrecking ball to make more room for Centennial Village, which will be home to hundreds of first-year Miami students.

During the work stoppage necessitated by the pandemic, officials from the University of Miami continued to confer with the project architects to audit the work undertaken thus far, as well as look ahead to what might be done differently moving forward.

Accordingly, the initial plan was for a complex with four residential colleges that could serve as home to 1,700 first-year students. The revised blueprints will add a fifth residential college, thereby upping the number of students who can live at the complex to over 2,000.

Architecture firms VMDO Architects and Zyscovich Architects, both of Coral Gables, are working in tandem with Gryon LLC, who is providing preconstruction services on the $335 million project. Other advisers on the project include Brailsford & Dunlavey. Coastal Construction will oversee certain aspects of both demolition and construction as well.

“The architectural expression of Centennial Village draws inspiration from the rich modernism of campus, the local and international style and culture of Miami, and the institutional aspiration of hemispheric leadership.”

“We are delighted to resume progress toward completion of our multi-year plan to modernize our housing on campus,” Jacqueline A. Travisano, executive vice president for business and finance and chief operating officer at the university, said in a recent statement. “When the project was paused, our team used that time to re-evaluate our initial plan and make some enhancements to its scope and timeline.”

According to the revised project schedule, the Hecht Residential College will close by May, with the Stanford Residential College also signing off for the final time by May 2024. A few months later, Centennial Village’s first two residential colleges will be ready for residents, who will enjoy a new dining commons. The final three colleges are now envisioned to be finished in time for the fall of 2026—for the university’s centennial.

“Reordering the phases of the project is beneficial for many reasons,” Jessica Brumley, vice president for facilities operations and planning, said in a recent statement. “For example, the revised sequence brings a new dining hall to resident students two years earlier than anticipated and creates a more compact construction site to limit the disruption on the surrounding campus area.”

Centennial Village is the second phase of the university’s plan to re-envision its campus not only for its upcoming centennial, but beyond. Collectively, the architects and contractors are working toward LEED Gold Certification on the residence halls.