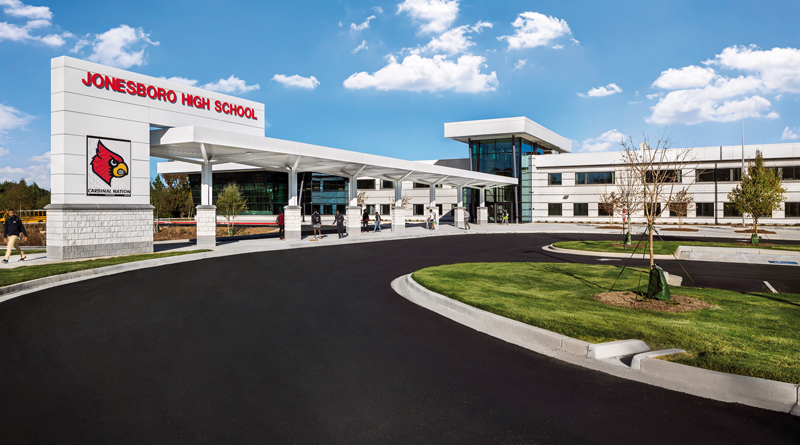 The entire school has been reoriented from facing Mount Zion Blvd. to now look out upon the more public-facing McDonough Street. Photo Credit: Cooper Carry

ATLANTA—Designer Cooper Carry and general contractor MEJA Construction have provided an entirely new vision for Jonesboro High School, located in Atlanta’s southeastern suburbs. Half of the older school was demolished—while classes continued to be in session—so as to make way for newer facilities.

The redesigned school features a double-level, main thoroughfare for pedestrians that bisects the school and links older areas with the new. “Main Street,” as it is being called, features two-story glass windows on both sides, allowing for ample views of the outside while letting natural light enter the thoroughfare itself—providing a central, orienting artery for the entire school.

The reimagined interior allows for better people flow and also provides learning spaces that are more in tune with modern high school educational needs. Additionally, the school’s “exterior envelope” was upgraded and new insulated walls and solar reflective roofs installed. To increase energy efficiency, the HVAC system and electrical systems were updated too.

MEJA Construction built a physical education facility that entails a gym, weight room, locker rooms and a track. Other areas that had to be constructed included a music suite and media center, a new cafeteria, as well as a job training center. New classrooms were installed so that Jonesboro students can be instructed in such areas as technology, culinary arts, barbering, woodworking and cosmetology.

The entire school has been reoriented from facing Mount Zion Blvd. to now look out upon McDonough Street, which is more heavily trafficked and thus more public facing.

Sophia Tarkhan, associate principal of leadership at Cooper Carry, said in a recent statement that her firm worked with the Clayton County Board of Education Members and Superintendent Morcease J. Beasley on fashioning a collective vision for the school’s present and future.

“Jonesboro High School was originally constructed in the 1960s and has had many additions over the years, creating a disjointed appearance from the street and making it difficult for students to navigate the school,” said Tarkhan. Accordingly, this made creating a unified look for the 21st century campus a bit of a challenge.

Added Ronick Joseph, Director of Construction at Clayton County Public Schools: “In working with Cooper Carry, we have established an exceptional learning environment where students can flourish and come to be motivated and inspired on a daily basis. The new Jonesboro High School is another example of the great things that are happening in Clayton County.”

“No matter where you are,” Tarkhan said of the redesigned school, “if you can see Main Street, then you can find your way.”