Articles
August 12, 2010August 13, 2010 1074 Views Ohlone College Newark Center for Health Sciences and Technology, SunPower Corp.
One of the fundamental goals of school planning is to provide students a safe and secure learning environment. In the past decade a great 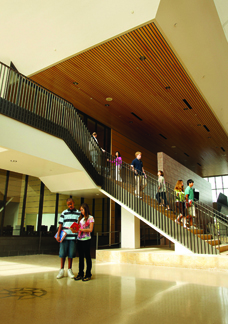 effort has been made nationally to outfit schools with high tech electronic surveillance systems to actively monitor and control school access and security. Discipline problems and crime can also be deterred by removing the inherent negative opportunities created when areas of schools are concealed from public view. While technology-based systems greatly improve school security, there are many opportunities for making school sites and buildings more naturally secure by carefully planning and organizing the physical environment.
When given the opportunity to renovate or construct new facilities, a process called Crime Prevention Through Environmental Design, or CPTED, can lead to learning environments that naturally discourage crime. Site design and building organization can have major impacts on student behavior and can help alleviate many safety concerns. CPTED principles that can be applied to school site and building design include: territory identification, natural surveillance and access control. In effect, creating a natural sense of student identity and ownership of the school, and providing a sense of transparency and observation throughout the school community.
Site Design
Conflicts in the flow of cars, buses, bicycles and pedestrians can cause safety and security problems on school sites, where hundreds of students converge during daily rush hours. Safety can be improved by directing different types of traffic into separate zones on the site, with safe paths for student foot traffic to converge at building entrances. Car and bus drop-offs need to be connected to entries with wide, open, observable walkways. The total number of active building entrances can be minimized to help consolidate supervision and security points, but entrances need to be planned with ample exterior and interior space to avoid congestion of student traffic. The sense of “natural surveillance” is increased at building entrances when populated active spaces like commons and cafeterias are located within view of the entry areas.
Building Design
Inside school buildings, the careful planning of activities and the flow of students contribute greatly to the climate of safety and security. Discipline problems tend to occur most often during transition times when students move from one area to another. This movement can be eased when the school is organized into small learning communities or teams. When teams of 100-200 students and teachers have an identified place or “house” within a larger building, including the majority of daily learning spaces, the need for mass movement throughout the school during the day is reduced. These houses also help to foster a familiar relationship between students and teachers, and a common sense of territorial ownership leading to natural surveillance and improved security.
In 2009, Chanhassen High School opened in Chanhassen, Minn. The new high school was designed using many CPTED principles. Several key goals were identified early on to improve the safety and security of the site and building:
• Minimize the number of building entrances for students and the community
• Increase supervision and access control of the building entrances and public spaces
• Allow separate and secure access to the academic, athletic, and performing arts areas internally
• Provide small learning communities of students and staff
• Provide free flow of student movement without congestion
The CHS site was planned with separate zones for automobiles and school buses. Cars and buses enter the site from two separate signalized intersections. Cars flow to the west side of the building, buses flow to the east. Students approach the main entrance from parking areas without crossing any bus traffic. Buses can load and unload on a drop-off loop that is free of all car traffic. Students enter the school’s central commons from either the west car drop-off or the east bus loop. At the end of the day student movement is reversed with vehicle traffic dispersed to the two separate intersections.
The central commons space at CHS acts as a “great room” for the whole school. It is directly observable from both the principal’s office/reception area and the activities office that are staffed throughout the day. During school hours, visitors enter the commons only after routing through the principal’s office for check-in. The flow of students can be easily monitored from the central commons to the three other main building areas: academic, physical education, and performing arts. The commons is a highly active open space with no concealed areas that could provide opportunities for negative behavior. The commons includes student cafeteria seating, an open informal stage for performances, access and views to the adjacent major building areas, as well as functioning as a lobby and break-out space for auditorium performances and athletic competitions.
The academic area at the school was intentionally designed to reduce the feeling of a 2,000-student high school by creating flexible team areas for groups of 250, or 500, students. The team areas are gathered around open common circulation space that extends from the central commons. Each of the 250 student team areas has a visible entrance from the common space, dedicated classrooms, open resource/project areas, staff offices, convenient restrooms, and student lockers — the sum of which creates an identifiable place and a sense of shared ownership for the team. The smaller-scaled team learning environment reinforces the school’s focus of thematic based interdisciplinary learning and creates a secure environment where students can thrive.
Electronic surveillance and security systems are also employed at CHS to help manage the few negative incidents that occur. But the positive learning climate and sense of ownership that exists between students, staff and community is directly related to the physical environment of the school. Results like these reinforce the idea that environmental design has a profound effect on student behavior and the general sense of safety and security in schools.
Steve Miller, AIA, LEED AP BD+C, has specialized in the planning and design of educational projects since 1984. He leads the K-12 market sector at Perkins+Will’s Minneapolis office.
Perkins+Will