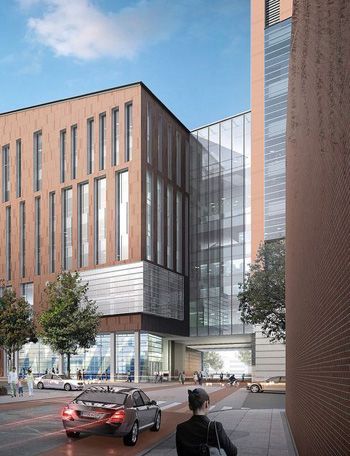 BUFFALO, N.Y. — The University at Buffalo recently unveiled the design for its new $375 million School of Medicine and Biomedical Sciences to be constructed in the downtown Buffalo medical campus.

Featuring more than 550,000 square feet, the massive seven-story building, designed by HOK, will be comprised of two L-shaped structures that will provide connectivity to the interdisciplinary campus.

“There are multiple institutions that are coming together to create a new sense of critical mass all within location,” said Kenneth Drucker, FAIA, design principal for the project and design director at HOK’s New York office. “The school is sort of a vessel where this common link can occur.”

Approximately 2,000 students, staff and faculty will utilize the space daily along with its connection to other buildings, via linking bridges and stairways, Drucker said. Providing even further connectivity is the incorporation of the Allen Street transit hub, to be housed on the ground floor of the building.

The construction of the new school building, which is seeking LEED Gold certification, is part of a greater vision to create a state-of-the-art downtown medical campus by 2020.

The surrounding downtown area, with a noteworthy architectural history, can be sensitive to new buildings, Drucker said, so the architects were challenged to produce a design both complementary to surrounding style and environmentally friendly.

“Doing a building in Buffalo has significance because in the 20s and 30s it’s where all the great architecture was happening at the time, with Sullivan and Wright and Yamasaki,” Drucker said. “It still has a very significant architectural heritage, so it’s important that the building has the same level of craft and architectural distinction as some of the other historic projects of Buffalo.”

The design features a glass curtainwall system and the façade of the building highlights a large terra cotta rain screen.

“We found that Buffalo, because of the climate and because historically its been a city about masonry, that we wanted to use a material that was closer to masonry something not of brick,” Drucker said.

Terra cotta, an organic material made of clay, provided the look and function most desirable to the project, Drucker said.

“The reason why this is important to us is because it’s a large building and we consider it to be an indigenous material to the area,” Drucker said. “And it creates and exudes a feeling of warmth and precision and cleanliness.”

“We believe very strongly in the use of natural daylight,” Drucker said. “The width of the two Ls that contain the majority of the program are very narrow, so we can get daylight into the lab space and the atrium.”

The second floor of the building will hold several classrooms and educational spaces as well as a library and café. A bridge on this floor will link the new children’s hospital and medical offices to the building.

The building’s classrooms will now be able to hold 180 students as opposed to the current 140. But the designs versatility also allows for larger classrooms to be broken down into smaller learning units

“Instead of just lectures and large classrooms for lectures, there are a variety of different classrooms sizes that break down the scale from 180 to classrooms for 100 to semi-rooms for less than 20,” Drucker said. “So, there can be specific learning and smaller units.

The third, fourth and fifth floors will hold 150,000 square feet of research laboratories. The sixth floor will house the building’s simulation lab and robotics lab, and the seventh floor will be equipped with a gross anatomy facility.

Groundbreaking on the project is scheduled for September 2013 with completion in 2016.