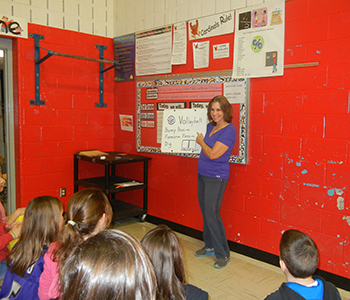 On Dec. 14, Adam Lanza shot 20 students and six faculty members at Sandy Hook Elementary School in Newtown, Conn. The incident is the second deadliest mass shooting by a single person in American history and one of the latest in a series of school shootings, prompting a renewed nationwide debate about gun control and the protection of American students.
While the debate continues, Hardwire Armor Systems has come up with a solution: bulletproof whiteboards and clipboards.
The Pocomoke City, Md.-based armor manufacturing company was founded in 2000 to develop, test and field armor protection for U.S. military ground vehicles, aircraft boats and personnel. Two years ago, the company made a clipboard version of the armor for law enforcement officials, and last summer, that line of defense was created as a 1-pound backpack insert for students to use. However, online customer feedback felt it was a heavy burden for kids to bear and could possibly have a negative psychological effect on them.
When the Sandy Hook shooting happened, George Tunis, Hardwire’s CEO, realized that it was really the adults who needed the armor and came up with the bulletproof whiteboard as a result. “When I drop my kids off at school, I put them in the hands of the adults at that school. Their job is to educate them, keep them safe, keep them fed, and until I pick them up, those adults are in charge of my kids,” Tunis said. “If we equip and train the adults, we empower the adults.”
Implementing Bulletproof Products
The material used for the bulletproof whiteboards and clipboards is MIJ Level 3A, which means it can stop any handgun, shot gun or small-caliber rifle. The whiteboards are about the same size as a police shield, 18 inches by 20 inches, while the clipboards are 10 inches by 13 inches. Both are light enough for teachers and students to write on it, also making it a useful tool in the classroom. The whiteboards even have different style handles that make the boards easy to hold up during discussions. 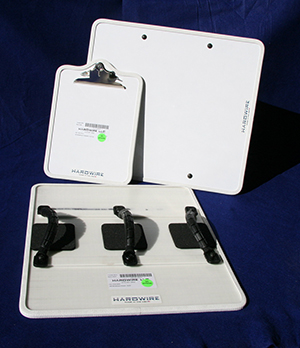 “I remember going to school it was hard enough as it was, and Sandy Hook really did add a lot of fear to the equation, so we wanted to take away from that. Psychologically, we wanted the armor to blend in for the children, and most importantly for the teachers we wanted to make something that was useful because in a crisis it needs to be handy, available and familiar. It needs to be something that they’re using every day,” Tunis said.
Twelve prototype schools, including ones in Virginia, Maryland and Minnesota, have been given the armor, and teachers are using them at their desk to plan out homework assignments, weekly schedules or the day’s lesson.
So far the feedback has been very positive: “The majority of teachers would do just what the teachers at Sandy Hook did — absolutely anything to protect their students. Ballistic whiteboards make that prospect easier,” said Charlotte Orlando, kindergarten teacher for Virginia’s Fairfax County Public Schools, in a statement.
Basic Training
Hardwire provides a two-hour training, conducted by retired secret service agents, for the teachers using the equipment. While the training encourages teachers to follow their school procedures, it adds a few extra ones to follow. Some of it involves assessing the situation, whether teachers should decide to stay put or evacuate. If they do stay put, the training teaches them where to position the kids and how to use the shield, and in the event they’re confronted with a shooter, how to use the shield as a defensive tool. “At Sandy Hook, those adults did every single thing right, but in the end they literally had to throw themselves at the bad guy and they didn’t have any equipment to be able to do that. It’s like having a fire, not having a fire extinguisher and just throwing yourself on it to put it out. Just one piece of equipment makes all the difference, so we teach the teachers how to use that one piece of equipment to put the fire out,” Tunis said.
The training also includes teaching the teachers how to work in teams. For instance, during an evacuation, basic military tactics can be used. According to Tunis, the military does not use a general order to evacuate a building. Instead, the military comes up with names for their exits so that they can tell each other where exactly to evacuate, but at schools, the exits are usually not labeled by location.
“We’re helping them understand the logistics of an attack. You want them to evacuate away from the problem, not towards it,” Tunis said. “In front of the students, you need the teachers with the shield and behind the students with the shield. On the outside, you should have the teachers surrounding the students with the shield. That’s just a basic lesson from nature.”
Training, for the most part, has been administered to the adults; however, teachers in middle and high schools are talking a lot about the devices with students as a means to teach science and physics because the “science behind [the speed of a bullet] is fascinating. Most people don’t realize that a 9 mm handgun has no more energy than a little league pitch at 45 miles per hour,” Tunis said.
“Now that we have bulletproof shields in our classrooms, I feel a lot safer knowing that we aren’t completely defenseless to an attack on our school. I believe that other schools should follow our example because this could potentially save a lot of people’s lives one day,” said Charlie Pritchard, ninth grader at Worcester Preparatory School in Berlin, Md., in a statement. “It’s good to know that if a gunman attacks our school that the students are able to protect themselves and one another.”
The Future of Bulletproof Armor
Another product that Hardwire is rolling out at schools is the bulletproof peel-n-stick door, a whiteboard door panel that can be applied to any standard door. It’s about 60 inches by 34.5 inches and can also be used for daily instruction, teaching and communication.
“If I had a vision for what whiteboards can do in schools, it’s a nonlethal piece of defense that can go in every adult’s hands. A larger, peel-n-stick version can go on the doors and the door becomes bulletproof. Then, you have two layers of defense, and the name of the game is buying time for the first responders to get there,” Tunis said. “It’s amazing what 92 empowered and equipped people can do to a man with a gun. Instead of being a crowd at the mercy of a bad guy, you’ve got the angry villagers coming after Frankenstein.”
So far, the equipment at the 12 prototype schools has been funded through the Adopt-a-School program, a partnership between Hardwire and the nonprofit Maryland Hawk Corporation that encourages corporations to sponsor a school or teacher through a tax deductible donation.