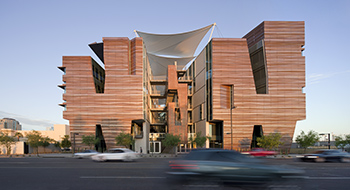 PHOENIX — CO Architects, based in Los Angeles, received the 2013 Honor Award for Architecture from the American Institute of Architects, California Council for the design of the Health Sciences Education Building (HSEB).

The $187 million building, which serves both the University of Arizona College of Medicine-Phoenix and Northern Arizona University, was noted for its boldness and innovative design of the interdisciplinary building that serves the colleges of medicine allied health and biomedical informatics. The new building is located on the Phoenix Biomedical Campus in downtown Phoenix.

“The design team found an opportunity to place a powerful symbol of a region’s identity, a canyon for higher learning, in the middle of a chaotic modern city. In effect, the architecture represents a geological formation, providing for a landmark for self- reflection and discourse, and the fluid exchange of ideas for healing,” said Paul Zajfen, FAIA, design principal for CO Architects. “This concept of geology would be accessible and visible to the city, expressed literally on the surfaces of the building’s copper façade, which mimics the rock striations found in the Arizona landscape – striations that are the records of geology’s adaptations to events throughout time. Canyons appear to be cut out of the building, through the façade at strategic points, creating areas for skylights and light wells.”

The HSBE was one of four designs chosen for the AIACC’s Honor Award out of 279 entries.

The design of 286,000-square-foot, six-story building was inspired by the surrounding landscape of the Arizona desert, as well as the geology of the mountains and canyons. The desert-like appearance was executed through the use of striated and folded exterior copper cladding as well as the two wings of the building, which create intentionally narrow “canyons.”

“The search for a cladding material that supported the goal of representing the Arizona landscape led to copper panels, because copper is a recyclable, self-finishing, naturally weathering material that has symbolic power as one of the natural resources of Arizona,” Zajfen said.

The building was constructed to meet LEED-NC Gold certification and paid special attention to the use of abundant Arizona daylight and responds to the areas need to reduce energy consumption. The lower level of the building and fewer windows as the building gets higher for heat control. The south-facing facades combine overhangs with perforated screens to function as sunshades and vertical fins control on the north side of the building.

“This building makes a statement on the land, while also being contextual to the site. Its bold design, shape, and color are appealing,” Zajfen said. “The creativity and effort that went into the exterior skin of the building is a factor, as well.”

Other awards for CO Architect’s design of HSBE include the AIA National Technology in Architectural Practice Building Information Model Excellence Award for Stellar Architecture Using BIM; the Best of LA Architects Award from the Los Angeles Business Council; an International Interior Design Association Southwest Chapter Pride Awards Design Excellence in Education and Outstanding Team on a Design Project award; and the Arizona Real Estate and Development Award for Most Challenging Project. The design is also a finalist for the Arizona Forward Environmental Excellence Award.