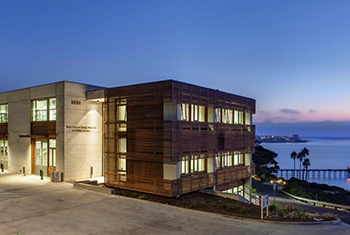 Designed by THA Architecture of Portland, Ore., and constructed by Rudolph and Sletten, headquartered in Redwood City, Calif., the MESOM Laboratory joins the David Keeling Apartments as the second LEED Platinum building on the UC San Diego campus.

The 19,000-square-foot MESOM Laboratory supports the university’s multidisciplinary research of marine ecosystem forecasting with formal and informal collaboration spaces. The building consolidated the research from separate buildings to a single facility in order to foster interdisciplinary interactions.

“We had a real need for multidisciplinary labs, especially for assembly and construction labs,” said Cammie Ingram, director, capital programs and space management at Scripps Institution of Oceanography, UC San Diego. “We had a lot of scientists doing build programs but didn’t have a lot of that type of space. Having assembly construction labs means we can go into the lab and load it right outside the door.”

The owner chose a site that allowed the facility to have twice as many assembly labs for a total of eight (four labs on two floors), Ingram said. She added that the site was an advantage but also made the project difficult because it was also constrained and relatively narrow. There was also the challenge of keeping the building’s profile as low as possible because La Jolla residents wanted to still be able to drive by and see the ocean requiring that the building minimize any blockage of the ocean.

“We were able to turn it into an advantage because we put all the mechanical equipment on the lowest level,” Ingram said. “It also basically became a design element because the exhaust stacks were placed on the back of building. They are clean and streamlined and look like rockets almost becoming a significant design element.”

Sustainable features of the building include natural ventilation and passive heating for all offices and workspaces; regionally sourced materials for the exposed concrete structure; exposed concrete structure to provide thermal mass; analyzed and reduced air flows in the laboratories; water-efficient landscaping focused on restoring native coastal plant species; use of FSC-certified wood at exterior siding and shade screens; and use of high solar reflectance index roofing materials.

“We have an excellent climate so we narrowed most of the need for intense energy use to the center core of the building,” Ingram said. “Two-thirds of the labs are able to have natural ventilation. Throughout the design process and construction process we did whatever we could to be as sustainable as possible.”

Ingram said that most of the funding for the $26 million project came from the National Institute of Standards and Technology. However, the school received funding from several sources, which is a major thing the team learned from this project.

“The bottom line for builders of an institution is to think about multi-funding sources,” she said. “Don’t think about getting it all from one source.”

The end product is a facility that is now one of a handful of LEED Platinum laboratories in the U.S.

“In less than a year, the MESOM laboratory has merited LEED Platinum status, a distinction that is extremely difficult for any facility to achieve and much more so for a working laboratory. This recognition underlines the high-quality design and planning — and commitment to the environment — that went into MESOM,” said Willie May, associate directory for Laboratory Programs, National Institute of Standards and Technology, in a statement. “NIST is very proud to have played a role in making this facility possible.”