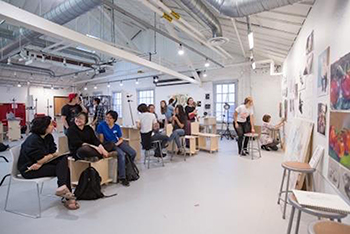 PROVIDENCE, R.I. — The prestigious Rhode Island School of Design (RISD) in Providence unveiled an extensive $12.1 million renovation of its Illustration Studies Building (ISB) on Oct. 10. The newly expanded and modernized building was officially dedicated during the school’s annual RISD by Design event.

Illustration is the second largest undergraduate major at RISD, with nearly 300 students and more than 40 full and part-time faculty. However, since 1979, the department had been housed in a 19th century building that previously served as a chemical and dye plant. The structure was last renovated in 1967. However, this most recent renovation reconfigured the ISB floor plan to correct the complex warren of spaces, providing the college with a fully accessible facility that better suits the school’s needs.

The three-year, multi-phase renovation revitalized the 43,500-square-foot building’s studio, classroom, gallery and home spaces as part of RISD’s 2012–17 strategic plan, according to a statement by the school. The building is now able to meet both the current and anticipated needs of the ISB’s rapidly evolving curriculum.

Also included in the renovation was a 5,600-square-foot addition onto the building’s east elevation spanning five stories. The new space houses seminar rooms, a code-compliant stairway, elevators and restrooms, making the building fully accessible and allowing each floor to be reconfigured.

“We are thrilled to have a facility that so fully supports the education we offer our students,” said RISD graduate and current Illustration Department Head Susan Doyle in a statement. “It is exciting to think about where it can help take our program in the years ahead.”

Shawmut Construction, with a local office in Providence, collaborated with award-winning architect and RISD graduate, Ed Wojcik of Ed Wojcik Architects Ltd. in Providence to revitalize the building, originally constructed in 1838. Shawmut Construction is known for its work on challenging historic renovation and preservation projects, and completed the multi-phased renovation over the course of three years. Work began on the project in May 2013 with an official groundbreaking ceremony.

“Our biggest challenge was completing the project without disrupting on-going campus activities and academic calendars, and we were able to achieve that with a phased construction plan during the summers of 2013, 2014, and 2015,” Ron Simoneau, vice president of Shawmut Design and Construction, said in a statement.

Ranked first in Business Insider’s survey of The World’s 25 Best Design Schools, RISD has an enrollment of approximately 2,450 students from around the world participating in full-time bachelor’s or master’s degree programs. The school was originally founded in 1877.