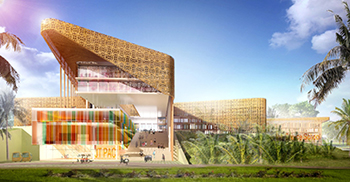 The Thiruvalla campus opened for 100 primary school students in June with six classrooms, a teacher’s room, cafeteria and administrative spaces. Upon full build-out, the K-12 facility will accommodate up to 2,500 students in an award-winning educational community, according to a statement by CetraRuddy.

The Thiruvalla campus comprises modular blocks for primary, middle and high school students, all housed in a single structure allowing for greater interaction between students of different ages and grade levels. The designs have been noted for their imaginative architecture, holistic approach to education and sensitivity to local context.

"I firmly believe the learning effect is maximized with the overall design, aesthetics, materials usage and the understanding that a school is more than just a building with windows," said Karthik Saravanan, vice president at Choice Group. "Thanks to CetraRuddy, this belief has been given form."

The new school building marks a significant milestone for both CetraRuddy and The Choice School, who are together creating a new prototype for K-12 education in the country, according to a statement by CetraRuddy. This is the fifth commission in India for CetraRuddy and the firm’s first of three planned school projects there. This particular project is the brainchild of entrepreneur Jose Thomas, founder of Choice Estates & Constructions Ltd. In 1990, Thomas founded The Choice School in Tripunithura, Cochin, and it now ranks among the country’s best educational institutions.

Other school projects for The Choice School now under construction in India include a major renovation of an existing campus as well as a new 2,500-student campus in Calicut. The projects have earned accolades, including a finalist spot in the World Architecture News Future Projects Education Award and the Architizer A+ Award.

The projects were spearheaded by CetraRuddy Principal Theresa Genovese, AIA, an expert source with extensive experience in education, cultural and library projects.