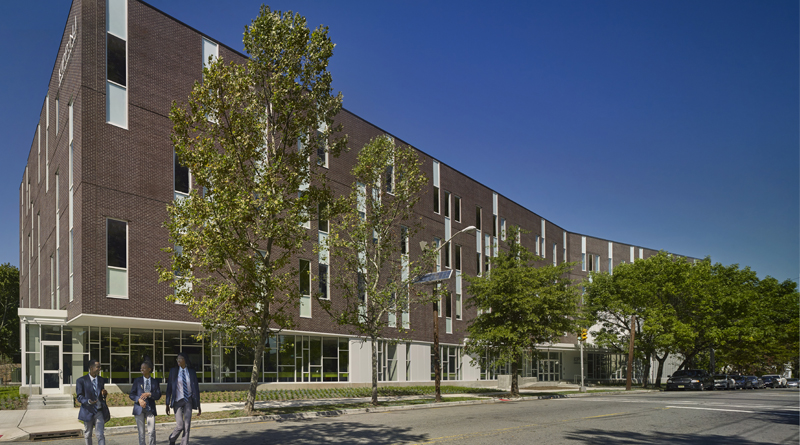 NEWARK, N.J. — Newark Collegiate Academy in Newark, N.J., is changing the way education is delivered by providing educational opportunities that go beyond the traditional classroom. The high school is the newest addition to the KIPP New Jersey (KIPP:NJ) network of charter schools. Debuted on Aug. 15, 2016, the 104,000-square-foot Newark Collegiate Academy serves roughly 600 students in grades 9 through 12, with space to accommodate up to 1,000 students in the coming years.

The $26.5 million project expands upon the network, offering a newer, less conservative design. Not only did KIPP:NJ want more classroom space, but it also wanted more public space and a strong emphasis on athletics — with an athletic field and a gymnasium incorporated, as well as space for students to practice mind and body wellness.

Boonton, N.J.-based Phelps Construction Group started construction of the school in September 2015. The firm provided pre-construction, construction management and design-build services, with Princeton, N.J.-based KSS Architects serving as the architect. The new facility features classrooms, science rooms, a performing arts area, a library and a full-service kitchen. Its gymnasium, cafeteria and turf field are also available to students as well as to the local community during off hours.

“The school made strategic decisions to make more ‘net-to-grow’ space that can be used for much more purposes that the students really benefit from,” said Merilee Meacock, AIA, LEED AP, partner for KSS Architects.

The school was originally designed as a three-story building with an adjacent gym, but KIPP:NJ decided to double its population to allow more students to benefit from its two rare amenities for urban schools: an athletic field and parking. As such, KSS Architects and Phelps Construction Group worked together to find a cost-effective way to add an additional two floors for future classroom space over the proposed gymnasium.

The final design includes a long four-story building, which features residential-sized windows in order to work with the scale of neighboring buildings. The building is split into two wings — one containing a cafeteria, office space and library with three levels of classrooms above, and the other containing the two-story gymnasium and two floors of classrooms that have yet to be fitted out.

Like several urban charter schools within the school district, Newark Collegiate Academy teaches students about healthy eating as well as encourages yoga and meditation. “A lot of charter schools try to support the family not just the students,” said Meacock. “This particular school was very focused on athletics.”

Before building the collegiate academy, however, students had to take a bus to get to athletic facilities, which meant more time in transit and less time on the field. This emphasis on dedicated time for athletics and wellness became a major focus for the facility and yet another opportunity for community engagement.

For this project, Phelps said that the project team saw a lot of emphasis on well-equipped science and art classrooms, and even traditional classrooms feature smart boards and other modern teaching technologies. Meacock added that the KIPP:NJ network uses iPads dispersed from iPad carts that can move throughout the facility.

“They’re making [technology and design] decisions that include much more amenities,” Meacock said.

With regard to technology, ample communication and data infrastructure was built into the school, according to Phelps. That includes smart boards and wireless connections for computer use, but also behind-the-scenes mechanical systems and energy recovery units on the roof.

Phelps added that lighting throughout the building is extremely efficient and works in tandem with the building’s unique design. All classroom light fixtures are high-performance recessed 2×4 units, which help eliminate shadows in low-ceiling applications, while the corridor’s linear fixtures play on the building’s unique angles. This concept also carried into the gym where the linear fixtures are suspended from the structure in an angled pattern and are not typical dome fixtures.

With all of the advanced design elements and technologies, the project created a variety of spaces that encourage students to learn outside the confines of traditional education, while also welcoming public involvement. It’s a win-win for both KIPP:NJ and the local community.