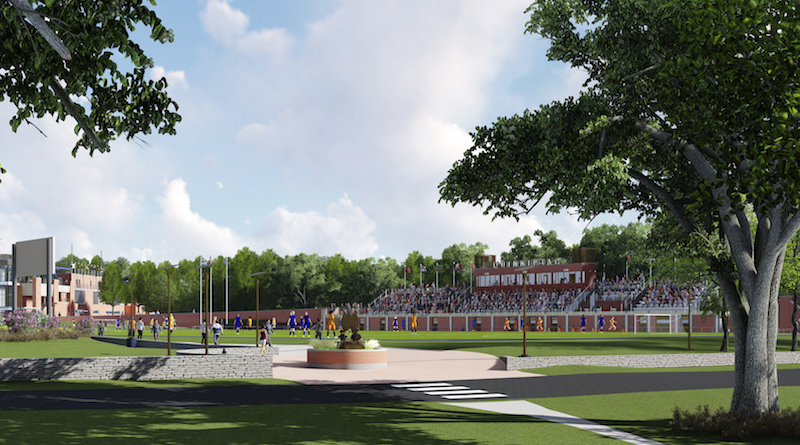 HAMDEN, Conn. — Design plans are underway for the new athletic complex at Quinnipiac University in Hamden. Centerbrook, Conn.-based Centerbrook Architects & Planners designed two adjacent venues that will serve as the new home of five athletic teams at the university. One facility is designed for both men’s and women’s soccer and lacrosse, while the other will accommodate women’s field hockey.

“We are grateful for the commitment that President John Lahey has made to Quinnipiac athletics as we strive to be one of the top athletic departments in the country,” said Quinnipiac Director of Athletics and Recreation Greg Amodio in a statement. “These new fields will provide our varsity teams and student athletes with premier facilities that rival those of our peer institutions and will allow Quinnipiac Athletics to continue to grow into an elite program.”

Construction on the soccer and lacrosse venue began last fall. The projects will include permanent seating for up to 1,500 spectators and an infill turf playing surface. There will also be two covered terraces for spectating and special events located on top of the grandstand.

Earlier this year, construction began on the field hockey venue. This includes permanent seating for up to 500 fans as well as an artificial turf field with a high-velocity peripheral irrigation system common for the sport.

Both venues, scheduled for completion in time for the 2017-18 athletic seasons, will feature several support spaces including locker, team and training rooms for the competitors and staff; broadcast-ready press boxes for the media; and a first aid area and restrooms for spectators.

“The two venues will work in tandem to create a unified athletic complex that also safeguards the adjacent wetlands,” said Centerbrook Partner Jeff Riley, FAIA, in a statement. “Abundant plantings and low-profile structures will merge harmoniously with the wooded setting.”

Design features of the complex include brick and cast-stone facades to mimic the traditional look of the university’s main academic and residential campus architecture. This will allow the two athletic venues to blend seamlessly with the rest of the campus look and feel.