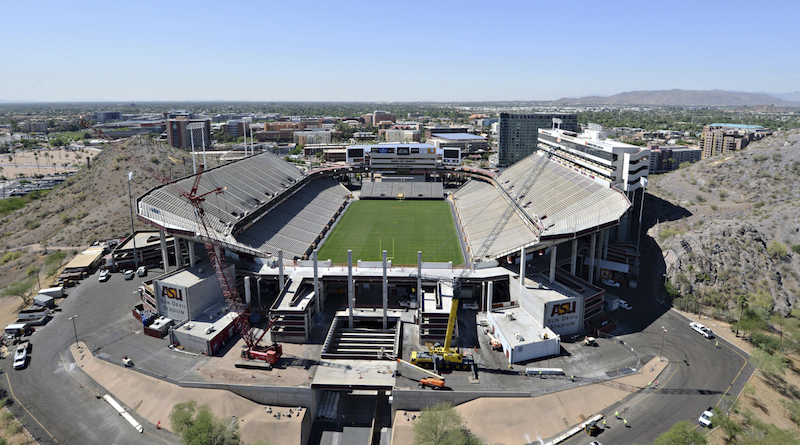 A major part of the project was completed in Phase II, which focused on the west and north sides of the stadium. It created two new concourses, new concessions and restrooms, and three new premium club or suite areas. It also included the beginning work at the north end of the stadium that involved building a kitchen, operation center, loading area and back-of-house operations area. Gould Evans Associates, with offices in Phoenix, designed the $64 million facility.

“This project has not only improved the fan experience, but elevated an aging 58-year-old stadium to the most technologically advanced stadium in college football, featuring a state-of-the-art Distributed Antenna System (DAS) and Wi-Fi network,” Abbott said. “Once construction on the last phase is complete, the university will be able to use the stadium as a multipurpose entertainment hub.”

The stadium was originally constructed in 1958 with approximately 30,000 seats, then renovated in 1977 to hold 70,311 seats and then again in 1988 to hold 72,011 seats. While these expansions enhanced the stadium’s capacity, they posed a challenge for the project team working on the latest renovation.

“These renovations brought with them varying levels of infrastructure upgrades structural designs that stitched components together and isolated others,” Abbott said. “We’ve had to be diligent in discovery, an integrated input into the design.”

The Stadium was built between two mountains and the Salt River bed, which means any work on the bowl had to be completed from the field side and the narrow fire lane on the west (under the upper bowl), according to Abbott. The north end of the stadium is now constructed on engineered fill where the Salt River had eroded native soil when Hayden Butte diverted its flow.

The construction team is currently in Phase II-a, which will involve completing the north end zone with more new seating as well as the Sun Deck Terrace and a new Student Athlete Facility. Last year, Hunt-Sundt completed the first phase of the project, which included infrastructure work and rebuilding the south end zone, while Phase III will include focusing on the east side of the stadium to create a new main and upper concourse and a new east sideline club.

“The construction phases had to be threaded in between football seasons,” Abbott said. “The [project] team had to construct the equivalent of two average Arizona homes for 265 days straight to arrive at game day. We’ve had to develop new and varied ways of aggregating long lead materials, [managing] an immense workforce and being agile enough to accommodate better ideas in production.”