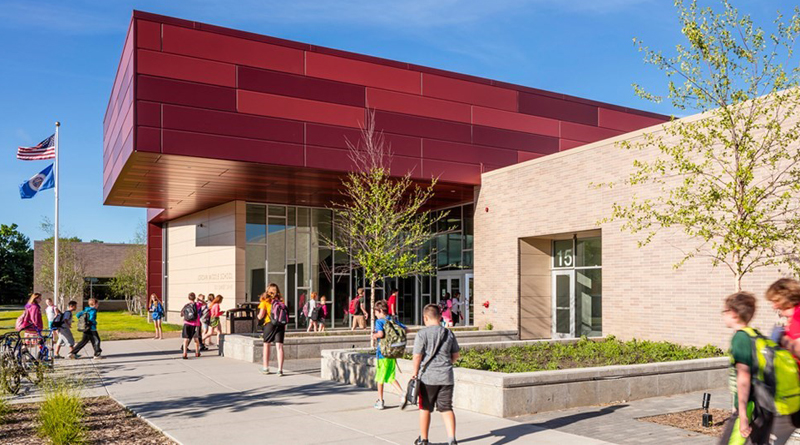 JORDAN, Minn. — More than students are going back to school at a Minnesota middle school, thanks to its recently implemented design innovations.

The design of Jordan Middle School, located in Jordan, is so successful that it recently hosted school officials from Missouri, Kansas and other states throughout the region, amounting to 50 hours worth of tours, according to Jordan School District Superintendent Matt Helgerson.

“It was driven by the desire for a different academic approach,” said Helgerson of the school’s new design, which resulted, in part, from staffers and the school board’s eagerness to increase collaboration between students and create dynamic learning spaces that could readily transform to suit a variety of use-case scenarios.

DLR Group, which has offices nationally including Minneapolis, was engaged to work with the school’s stakeholders to design the extensive renovation, which cost about $29 million. The redesigned school opened for the 2015-16 school year with modular furniture, movable tables and chairs that can easily be arranged into workspaces of various sizes and a project room and science lab area festooned with transparent walls.

“It’s a nontraditional design but very purposeful,” observed Helgerson, who pointed to the garage doors in the classroom walls that open up into a commons area. “It has 21st century level technology for kids be able to connect, share and collaborate.”

The open commons area also includes a tiered stage that is used for live performances such as choir concerts. The district also incorporated energy-efficient measures such as lighting controls that assesses the amount of natural light coming through the windows and adjusts the building’s electrical lighting accordingly.

“At the same time we were building it, we were going one-to-one with our student devices, and we wanted to build something where staff and students were able to collaborate and mix and work in a setting that’s more a ‘corporate, professional workforce’ driven environment,” said Helgerson, who estimated that the school’s renovations could increase student capacity by 200. “A number of our parents work in that professional setting, and I think, in order to be attractive to families but also — more importantly — to prepare kids for that environment, I knew we had to create something different,”

The middle school’s new design has received its share of honors, including being among 26 honorees in Finance and Commerce’s Top Projects of 2015 series as well as being featured in the Minnesota School Boards Association Journal.