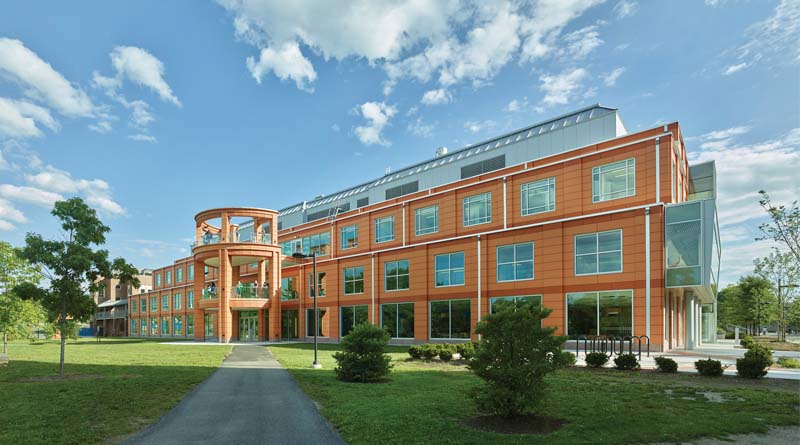 Today, schools across the country are being forced to renovate, as many were built 30 or 40 years ago at a time when energy demands were minimal. Technology advancements in the education market have made renovations and expansions a priority as schools continue to integrate these tools into 21st century learning curriculums.

Randolph R. Croxton, FAIA, president at New York-based Croxton Collaborative Architects, designed the 75,000-square-foot Wooster Hall restoration and renovation project at State University of New York (SUNY) at New Paltz, which was completed in fall 2016. The building uses an efficient design to create a sustainable and “humanistic” environment for students and staff. School Construction News spoke with Croxton about the facility’s innovative redesign (anticipating LEED Gold certification) and how it sets an example of ways to enhance a building’s flexibility, connectivity, and maintenance and operations moving into the future.

Q: What are the top trends in education that are forcing schools to renovate?

Croxton: I think we’ve reached a point at which there are a lot of school buildings built in the 1960s and ’70s before any of the demands on energy that we see today. We have a prolific amount of buildings that are underperforming in a number of ways and have embedded risks. So, the pressure to renovate in many ways is a good thing. In regard to value, I much prefer to see renovation than new construction in a lot of cases. If there’s an error on one side of the equation, it’s the tendency to tear down and build new when something can be renovated, particularly in college and university settings.

The context of a university, college or school is that it’s an intergenerational place. You literally have buildings that are 30 and 40 years old, so people have strong attachments over a lifetime to that place. The masses, the urban design, the pathways [that make up the school] are part of memory as a value. To me, it’s almost that you want to come into a setting like that when you’re thinking about updating and delivering a high-performance facility and even meeting carbon neutrality and sustainability standards. You can still do all of that in most cases with a rigorous and informed renovation process, and Wooster Hall’s very much an example of that.

On the sustainability side, which ties directly into this issue of a value-centered design process, we had a building that was done in the manner of Brutalism in 1967 and had all the technical failures with a lack of energy efficiency combined with very difficult challenges in regard to wayfinding in the building. We characterized our mission to go from Brutalism to humanism, which wraps up a whole lot of issues about daylight, wayfinding and sense of place in a geophysical way. We mapped out a United States Geological Survey to create a main stair based on solar traverse. There’s a line of movement of daylight throughout the space created by an overhead oculus so that the light hits the top of the stair at summer solstice and hits the bottom step of the stair at the equinox. There’s a conscious organization of the building around daylight as a constant connection of health and well-being. Your sense of the time of day affects your sleep patterns and health on a very basic level, so all are issues that informed the design.

We still reused 98 percent of the structure of the existing building and have a very high-performance building, which is a testament to the massive number of buildings that could be much more economically reused and transformed without tearing everything up and disrupting memory and pattern and the sort of sense-over-time of a college or university.

Q: What is the risk for schools opting not to renovate as the 21st century learning curriculum continues to evolve?

Croxton: I think that you run the risk if you have a very strong bias towards new construction. The risk is looking at the building as an object, and there’s a lot of pressure at a university to do so because donors give money. They give money for a highly visible singular building, and they’re not looking at the broader picture of the spaces between the building or urban design of the overall context. There’s a lot of pressure for universities to essentially just expand to become suburban settings instead of increasing the density at the university’s walkable core and renovating or inserting new construction within a more compact area. There’s a tendency to mimic the suburban notion, which is another problem in America — this horizontal growth, just spreading out like a big puddle. This requires more money for maintenance, and you begin to eat up space with cars and parking. You lose the sense of the pedestrian environment and the ability to walk between classes on a more human scale. Even if you have to build up and have some taller structures integrated or go down and have more spaces that are daylit from the garden level and carved out, it’s better to hold this notion of the center and try not to let everything go horizontal.

Q: What was the major goal of the Wooster Hall project for SUNY at New Paltz?

Croxton: The main goal was to keep the massing and complement it. We didn’t go in and turn the building upside down or build big tumors on its side. We took the massing as it was and really articulated it and expanded it in a way that was a direct complement to how the massing had been originally designed. We kept the quad on the north and quad on the south, and then created a very large daylit hall that interconnected the two.

Q: How did your team specifically achieve a 26 percent savings in the net programmatic space, and what other spaces were included in the project as a result of that savings?

Croxton: There was a very strong desire by the campus to get more interaction between faculty and students and a very strong desire to provide a lot of faculty spaces and offices in the building with adjoining social spaces, dining space and common spaces (of course, in addition to academic spaces). The Departments of Psychology, Anthropology and Engineering located in Wooster Hall wanted to have their own facilities and conference rooms. But what we did in this case was work very closely with the users and decided that, instead of having multiple conference rooms for each department, we created a conference room that was not tied to just one department, which allowed us to gain more space back.

Read the full Q&A in the July/August issue of School Construction News.