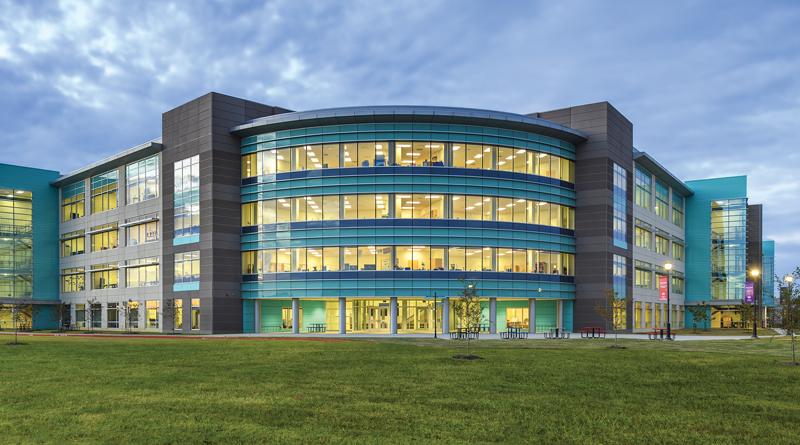 Students from 50-plus nationalities enjoy personalized learning at the new British International School of Houston in Katy, Texas.

The British International School of Houston (BISH) has very strong personalized learning solutions. That’s why when the school decided to build a brand-new campus in Katy, Texas (located just west of Houston), this concept was woven into every design decision.

The curriculum and building itself are created entirely around the needs of the students and their learning, moving from a teacher-driven model to a learner-driven model. “For many years, schools have been built around the needs of the teachers,” said Andrew Derry, principal at BISH. “Teachers have their own room, with their own desk and their own white board, and students move from room to room as they get a year older or as they change subjects. At our campus, the learning environments are far more flexible than that and can change at a [moment’s notice] to suit the needs of the individual learners.”

At first, the teachers were silent when they were told that they wouldn’t have individual classrooms or desks, but they quickly started to embrace the building, Derry said.

The new 280,000-square-foot facility was designed to accommodate these new learning models; however, the school also needed to transfer from its previous northwest Houston facility because it was experiencing flooding, according to Van Martin, chairman and CEO of Tribble & Stephens Construction Ltd., the locally based general contractor on the project. The Indianapolis office of Fanning Howey served as architect of record through a joint venture with locally based House+Partners Architecture. Construction began in January 2015.

Completed in time for the 2016-17 school year, the facility serves as the North American flagship campus for Hong Kong-based Nord Anglia Education. It is an international school, particularly popular among expats living in Houston who are looking for the continuity of a British curriculum for their children.

More than 50 nationalities attend the school, with a majority of students being British, but students don’t have to be expats to attend. In fact, the school’s reputation is so strong that it’s considered a premiere private school in the Houston area, according to Dan Mader, AIA, ALEP, and principal at Fanning Howey. Its popularity was another reason for the new school, which increased the school’s capacity from 850 at its previous location to 2,000.

The BISH curriculum brings engagement and a broad range of programs for students from the very start of Pre-K through 12th grade. “The Early Years program is fairly unique for schools of this kind,” Mader said. “It’s integrated as a continuum of their curriculum — not just as a means to take care of Pre-K kids.”

The school particularly emphasizes a project-based learning approach to teaching science, technology, engineering, arts and math (STEAM). An ever-growing partnership with Massachusetts Institute of Technology (MIT) and The Juilliard School continue to redefine those methods of teaching and learning. Not only do teachers participate in workshops at MIT to get ideas for the curriculum, but students also get the opportunity to visit MIT to immerse themselves in a culture of hands-on problem-solving. Similarly, the school’s music program is curated by Juilliard and is designed around 12 categories for students to explore a wide variety of musical genres, styles and cultures.

Designing for the Curriculum

The school’s British curriculum — which relates more to a holistic view of the student, rather than a compartmentalized one — played a major role in the design, addressing two major themes: personalized learning and transparency.

“The main goal of the project was to design and build a genuine ‘school of the future,’” said Derry.

The entire facility is centralized around a four-story atrium that includes a second-floor university-level research commons called the Agora, surrounded by 16 flexible academic neighborhoods. From there, teachers are assigned to a neighborhood, and in that neighborhood, there are a variety of different types of furniture and learning areas that can be customized to the needs of the students learning in that neighborhood.

“We work closely with MIT on our Design Thinking curriculum,” said Derry. “This includes elements of entrepreneurial challenges, coming up with new ideas, failing, rethinking, pivoting, failing and failing again. This is probably the biggest thing we have learned — the importance of failure and pivoting.”

The “arts” portion of the STEAM curriculum doesn’t disappoint either. Designed in collaboration with The Juilliard School, BISH’s Performing Arts Center features a theater, black-box theater, choral rooms, a dance studio, and keyboard- and strings-instrument laboratories. There is also an Aquatics Center with learn-to-swim and competition pools as well as extensive outdoor sports fields, including FIFA-regulation soccer pitches and a varsity stadium.

And all of this project-based learning is also put on display due to the requirement that 50 percent of the walls in the facility be entirely made of glass. “There was always a desire for transparency so that, as you’re in the building, people can see education taking place, and students see their peers engaged in learning from a motivational standpoint,” said Mader. “That’s a pretty strong attribute for a building to have.”

There are also academic wings that feature what the school calls “learning communities” — each with a variety of breakout areas that act as project-based learning centers in each academic core, according to Mader. Hand-held devices and high-tech equipment also encourage learning to occur anywhere throughout the building.

“There was very much a focus on flexibility and future proofing, knowing that if the school wants to be cutting edge from a technology perspective, administrators have to acknowledge that changes [will occur],” Mader said. “You have to build that in from a concept standpoint so that it’s easy to update and that the backbone and technology foundation is strong enough for whatever changes they will make in the future.”

Derry said that the students had the biggest impact on the design. “We worked with various groups of students on many areas of the school. As an example, we set a capstone project for a group of juniors,” Derry said. “They worked for a week in the summer in the offices of the architects who designed the building. We then gave them a budget and let them design a major part of the outside garden and farm. Some of those student now have places to study architecture at the university level.”