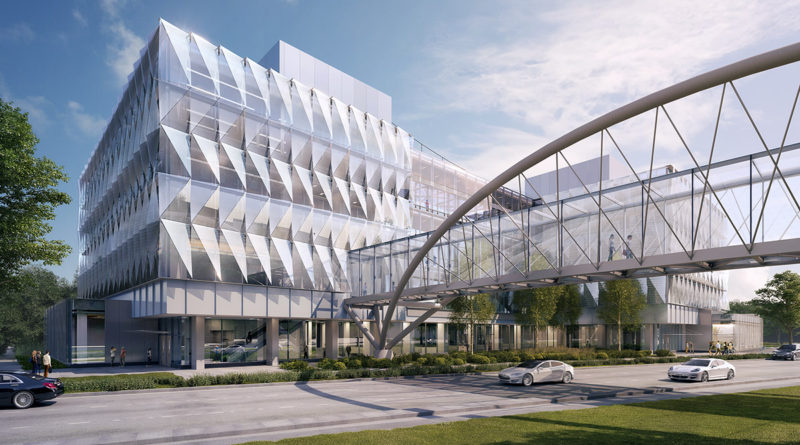 The glass-and-steel building will include a skybridge over Franklin Boulevard connecting to other research facilities on the Oregon campus. Photo Credit (all): DBOX

EUGENE, Ore. — The University of Oregon (UO) in Eugene announced plans and unveiled renderings for its Knight Campus for Accelerated Scientific Impact on Oct. 27. The groundbreaking is planned for early February 2018, with construction on the project expected to start next spring.

The first phase of the project — which was designed by Ennead Architects — will be completed in phases, the first of which will be a 160,000-square-foot $225 million set of buildings connected by a glass terrace. This initial part of the project will be built along the north side of Franklin Boulevard between Onyx Street and Riverfront Parkway. The UP Board of Trustees approved UO spending for this phase during the last week of October.

The overall project cost of the Knight Campus is $1 billion. In addition to the $225 million that UO approved in October, UO Graduate and Nike Founder Phil Knight and his wife Penny donated a gift of $500 million towards the project’s development and construction. Additionally, $50 million in state bonds will serve to fund the project. The university still must raise $500 million from other donors.

“Penny and I are thrilled with the progress that is being made with this new campus,” Knight said in a statement. “We have high hopes that these buildings and the people inside them will do great things for our university and the state.”

The new Phil and Penny Knight Campus for Accelerating Scientific Impact has a goal to fast-track scientific discoveries into innovations that improve the quality of life for people in Oregon, the nation and the world, according to a statement from UO. The new campus is intended to transform student education through discovery-driven learning, engage the public in the excitement and creativity of scientific research, and foster diverse perspectives and participation in scientific research.

Todd Schliemann — one of the lead architects at Ennead on the project — said the new complex will provide researchers and students with a compact, collaborative space that far surpasses the potential scientific collaboration of previous projects, according to a recent interview with KLCC. The glass-and-steel building will also include a skybridge over Franklin Boulevard connecting to other research facilities on the Oregon campus and will create a gateway corridor between Eugene and Springfield.

The architectural renderings and three-dimensional models that were revealed on Oct. 27, “represent months of intensive work by our terrific architectural team and on-campus building user group,” according to Patrick Phillips, acting executive director for the project and professor of biology at UO, in a recent statement on the university website. “The architecture itself reinforces the Knight Campus goals of supporting innovative, interactive and high-impact research in an open, cutting-edge space.”