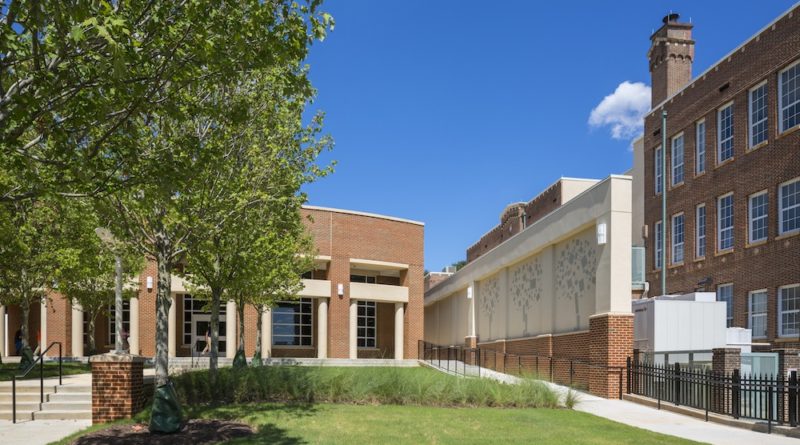 ATLANTA — Early 20th century Architect Francis Palmer Smith was not the client when Joseph E. Brown Middle School was renovated recently in Atlanta, Smith’s hometown. Yet, in a sense, he was.

The project preserved the authenticity of Smith’s Romanesque-inspired design of Brown and advanced a philosophy of the “scholar architect” that school buildings should influence their users and “should participate in the education of students and help them appreciate beauty and culture.” Worn, circular medallions on the façade of the near century-old building are inscribed with inspirational cues such as “citizenship,” “service” and “culture.”

Besides upholding Smith’s ideals, the $22 million Brown Middle School additions and modifications project delivered to its client, Atlanta Public Schools (APS), the infrastructure of a 21st century teaching and learning community. The upgrade involved select interior renovations to the original four-story Brown school building and added a multipurpose building. The work scope also included an array of campus improvements. Cooper Carry served as the architect on the project, while JE Dunn Construction managed construction — both of which have local offices in Atlanta.

“It was our intent to provide an inspiring education environment that respected the original architecture, revering the existing building in form, composition and detailing,” said Sophia Tarkhan, associate principal with Cooper Carry and project manager for Brown Middle School.

Older-building renovations typically present surprises. “It’s not uncommon to take walls down and discover things that aren’t supposed to be there, things not reflected in the documents,” said Brian Stephens, superintendent for JE Dunn Construction. “We had our share of revelations and odd challenges.”

For example, field measurements of the space between the existing gymnasium and classroom buildings revealed a slight discrepancy between the structural drawings and the actual measurements. JE Dunn also worked closely with its masonry trade partner to ensure the Flemish bond brickwork on one side of the auditorium building lined up seamlessly with brick patterns on the new building. Matching up the brick, mortar and cast stone elements of old and new was a meticulous exercise in trial and error. Permitting delays also stirred anxiety.

Like many APS projects, particularly renovations, the Brown project was in a dense residential area. Homes lined the street directly across from the school. Project personnel placed high priority on the safety of the surrounding community and were careful to minimize disturbances caused by the construction. Sidewalk access and street parking on both sides of Peeples Street, Brown’s location, were maintained throughout construction.

The construction team dealt with one especially untimely challenge: a historic rainy season that bedeviled the project from day one. Not only was December 2015 cold, Atlanta received 12.5 inches of rain — the rainiest Atlanta December in 20-plus years.

“Every day it rained,” Superintendent Stephens recalled. “At times, water was 2.5- to 3-feet deep. Worse than the water, was the amount of mud. It was a struggle.”

Even as rains poured, however, workers installed the concrete foundations for the addition building and installed a massive underground detention system.

The core of the Brown Middle School project involved select improvements to the historic four-story building, including reconfigured classroom spaces in some areas to create larger, more open learning settings. The administrative suite and the school’s main entrance were upgraded to improve ambiance, function and security. The project also gutted the building’s drab, sparingly used gymnasium basement, transforming it into an attractive dance room and STEM lab spaces filled with natural light.

Particularly painstaking was the task of replacing worn terrazzo flooring — popular in public buildings during the 1920s — in the school’s corridors and stairwells.

The 34,500-square-foot new addition building hosts a dazzling, digitally enhanced “media commons” that promotes integrative learning — a big move up from the traditional media center, housed in the basement of the original building. Now main-level front and center, the media commons is “a communally experienced space that celebrates learning,” said Tarkhan of Cooper Carry. “With this move, the natural progression was to extend this experience to the exterior by creating an enclosed terraced, soft-scape courtyard.”

From inception, the complex undertaking benefited from the entrenched culture of collaboration shared by APS, JE Dunn Construction and Cooper Carry. The three have collaborated on multiple projects for more than 10 years.

“Our working relationship with APS and Cooper Carry was one of the main reasons the job went as smoothly as it did,” said Jackie Avello, JE Dunn project manager. “It would be difficult to overestimate how much the trust and camaraderie already built into the team contributed to our getting timely answers and making on-the-fly decisions regarding design changes and owner-requested changes, and to our ability to respond promptly to unforeseen conditions.”

From innovative partnering to heavy reliance on technology, including building information modeling (BIM) and hyperlinked construction documents, the project adopted tools that saved time and resources.

An on-site project engineer worked each day to maintain the set of drawings, with the master set pushed to the entire project team immediately after it was updated, both via email and on the SharePoint project website. By using tablets, mobile kiosks with hyperlinked drawings and a printer, workers in the field could constantly access the latest plans — and take them directly to where their work was being performed. The SharePoint project website saved the project over $25,000 in printing costs.

JE Dunn also self-performed approximately 15 percent of the project’s scope of work, including concrete, demolition within the gymnasium scope, doors and hardware, rough carpentry and drywall. Doing so gave the company greater control over manpower and procurement, making it simpler to control costs and schedule.

The team also leveraged lean construction processes, particularly The Last Planner System, to promote smooth workflow and superior schedule performance. The Last Planner centers on pull planning sessions, in which all “last planners” (persons closest to the work with authority to make decisions) meet in a large room and plan together, working backward from the end of the project to the beginning. For each major project milestone, the last planners identify work that needs to be completed, or barriers that need to be overcome, before each task or activity can proceed. The interactive, mutual accountability of the process effectively reduces the amount of fluff trade partners can build into the schedule.

JE Dunn delivered the Brown Middle School project on time, within budget and without a single lost-time incident.

Jackie Avello is project manager for JE Dunn, while Brian Stephens is the company’s superintendent.