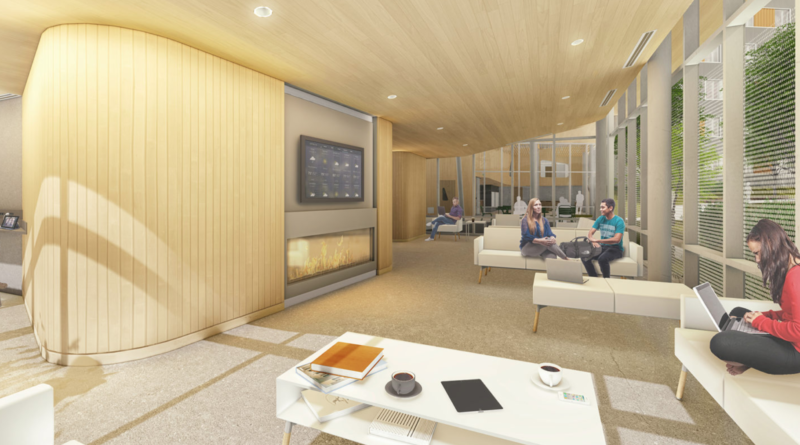 FAYETTEVILLE, Ark. — When one thinks about the American south and “a cabin in the woods,” the notion of a large-scale, mass timber interactive learning project probably comes to mind long after the film “Deliverance” let alone the University of Arkansas.

But the campus, home of the Razorbacks, is precisely where the project is located and the cabin concept isn’t the location of a backwoods thriller but a national design collaborative led by Leers Weinzapfel Associates (Boston), Modus Studio (Fayetteville, AR), Mackey Mitchell Architects (St. Louis), and OLIN (Philadelphia), created the project, now under construction.

The 708-bed Stadium Drive Residence Halls feature exposed, locally harvested wood structural elements made from mass timber. And what is this “mass timber?” According to the website reThink WOOD (produced by the The Softwood Lumber Board, a Washington, D.C.-based industry funded group that promotes uses of softwood lumber products in outdoor, residential and non-residential construction), mass timber is a category of framing styles often using large panelized solid wood construction. These include cross-laminated timber (CLT), nail-laminated timber, glue-laminated timber, dowel-laminated timber or glulam panels for floor and wall framing.

The University of Arkansas project used CLT for its wooden columns, beams and cross-bracing, which are all visible in the interior. The structural columns and beams are made of glulam, where layers of wood all facing the same direction are laminated together under pressure. Part of the idea, according to a profile in The Architect’s Newspaper, was to “to present a sense of warmth, and to connect students with Arkansas’s local ecology” and is expected to be finished in 2019.

Clocking in at a staggering 202,027 square feet, the Stadium Drive Residence Halls are a pair of five-story buildings festooned with a zinc-hued paneling, whilst copper-colored panels are arranged such that they created the illusion of floating against their backdrop.

The three residence halls converge upon a plaza and also feature classrooms, dining facilities, performance spaces, administrative offices and faculty housing as well as the maker-spaces that have become de rigueur on contemporary campuses.The buildings themselves arc around three courtyard areas, and each hall has a double-height ground floor lobby outfitted with floor-to-ceiling windows with views of the local flora.

Att the end of each residence hall floor is a large study room, which will be lit at night and serve as luminous attractants for the entire campus. In keeping with the homespun vernacular, students access the northern building’s main entrance via a covered “front porch.” Likewise, the so-called “cabin” is the central room that conjoins the hall’s two wings. The cabin features a hearth, community kitchen and lounge spaces, topped by a green roof.