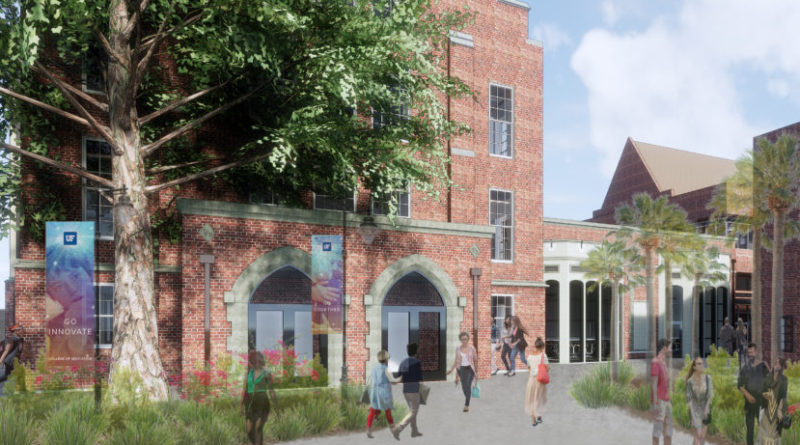 The University of Florida (UF) is working to restore the historic Norman Hall on campus. Photo Credit: Walker Architects

GAINESVILLE, Fla. — The University of Florida (UF) in Gainesville is working to restore the historic Norman Hall on campus. A formal groundbreaking ceremony took place on March 23 to mark the start of the restoration.

Norman Hall — which now houses UF’s College of Education — was originally built in 1934 to house the P.K. Yonge Laboratory School. At the groundbreaking ceremony, this and more of the building’s history was shared. The event featured a traditional ceremonial dirt toss with golden shovels and a drumline from the UF marching band. In addition, UF and college officials unveiled plans for what the new academic hall will look like when complete.

Speakers at the ceremony included Ted Yogo, a Florida congressman as well as former Florida Congressman John Mica. In addition, the UF President and Dean of Education spoke, as well as Walker Architects amongst others.

The architect on the project is locally based Walker Architects, with the D.E. Scorpio Corporation (also based locally) serving as the general contractor on the project. The budget for the restoration of Norman Hall will be supported by $29 million from the Florida Legislature. It is projected that the project will be complete by September 2019, with hopes that the building can be fully occupied and ready for use by January 2020.

While the formal groundbreaking just took place on March 23, the first major phase of the restoration project is already underway, with interior work being the first step. This first phase has meant the clearing out of classrooms, labs and offices in the newer Norman Hall Annex (built in 1979) wing and moving everything to the original Norman building.

The renovations and repairs during this initial phase of the restoration on Norman Hall will include an overhaul of the building’s infrastructure. This will mean the installation of a new roof, new windows, all new plumbing, upgrades to electrical system, heating, ventilation and air-conditioning. In addition, the removal of asbestos and lead paint will be taking place. The restoration project is the first major restoration work on Norman Hall in the 84 years that it has existed, according to Glenn Good, dean of UF Education.

“The renovations will make Norman Hall more suitable for preparing the educators and educational leaders who will address the educational opportunities and challenges of the future,” Good said.

In addition to improving the building and maintaining the best of the historic features, the renovation project will also include a number of technology upgrades intended to better support student learning. These upgrades include configurable classrooms and meeting spaces, more space for research and electrical outlets to support student technology needs as well as other technology-related upgrades.

In addition, a spacious conference room for guest speakers will be added to the building. Even better, the conference center will be connected to a new café bakery where Norman Hall’s existing rear loading dock currently resides.