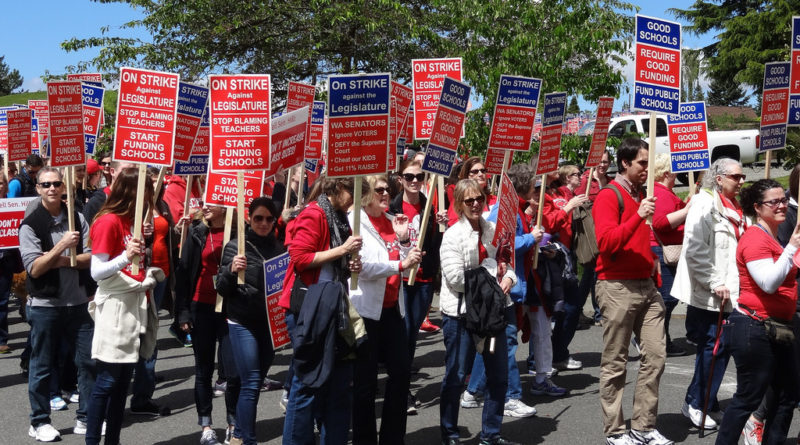 PHOENIX — Hundreds of schools across Arizona continued closure May 1 as educators and their supporters marked their fourth day of a statewide walkout, demanding teacher raises and restoring necessary school funding back to pre-recession rates.

Sparked from nationwide demonstrations, the walkout began late April with nearly 110 districts and charter schools comprised of 852,000 students closed, making it the largest teacher walkout in recent U.S. history. More than 50,000 educators, parents, students and supporters filled the streets of downtown Phoenix later convening at the Capitol to voice their demands.

According to CNN, the Arizona Educators United (AEU), a coalition of Arizonan teachers and educational professionals, asked for a 20 percent pay raise for teachers by next school year and annual raises after that until teacher salaries reach the national average. Leaders of AEU said they would end the walkout if the state legislature approved a budget. However, the budget fell short of what AEU originally demanded.

Arizona Gov. Doug Ducey and Republican leaders in the legislature offered a deal May 1, announcing that they were giving a 20 percent pay increase to teachers without raising taxes. The proposal also includes making the first payment toward restoring nearly $400 million slashed from school building and maintenance budgets following the 2008 recession. This, however, did not satisfy the teacher’s demands for improved education funding, contending that the proposal would not be viable without tax measures.

Teachers of Statewide Walkout Take Matters into Their Own Hands

The teachers continued their protest even when the legislature was released while grassroots groups filed paperwork to introduce a ballot initiative, bypassing lawmakers and going straight to the voters for education funding. The initiative, if included in the November ballot, would plan to increase income tax on wealthier Arizonans to support education funding.

AEU leaders told the media that they didn’t get everything they wanted but promised to keep fighting. “They are only going so far. They will not restore the $1.5 billion the AEU wanted,” said Noah Karvelis, a teacher and AEU organizer, at the news conference. “The war is not over, but we’ve won an important battle to move the legislature this far.”

Schools anticipate to open May 3 as teachers participating in the walkout say they will return to school if the governor passes the budget proposal.