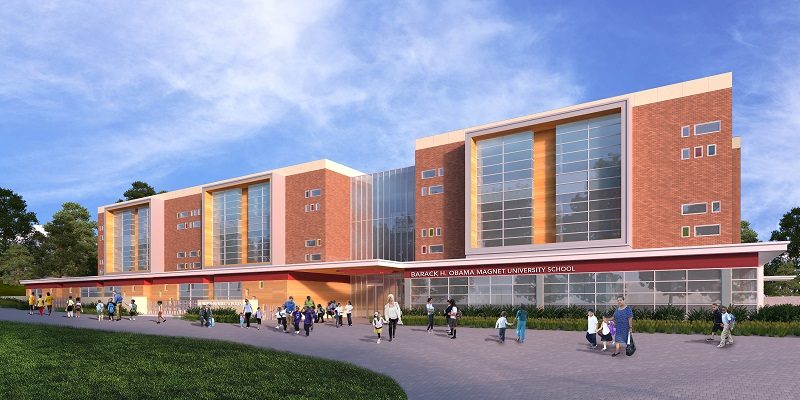 The three-story, 63,000-square-foot project on the campus of Southern Connecticut State University (SCSU) will be a New Haven Public School (NHPS) for 490 Pre-K through 4th grade students. It will additionally extend opportunities for interning, volunteering and mentoring for SCSU’s School of Education students that are studying to become teachers. The Barack H. Obama Magnet University School will boost the bond between SCSU and NHPS, by nurturing a mutual focus on innovation and best practices for STEM (science, technology, engineering and mathematics) disciplines, and special education.

Developed in a partnership between Pickard Chilton and Hartford, Conn.-based JCJ Architecture, the school’s architectural design creates an effective educational environment by providing all classrooms with access to natural light and scenic views, and all primary classrooms will have vibrant vistas of West Rock. The heart of the building is the Cafetorium and Gym, which can combine to form a larger space for entire school functions. This space has sightlines to the classroom corridor and to the outdoor play areas. The building will boast an open courtyard that aligns the adjacent woodlands in order to easily connect students with nature. Two wings around the courtyard contain the Media Center, Art, Music and Science Discovery Center.

Pickard Chilton incorporated into the school such sustainable highlights as photovoltaic rooftop panels and green roofs, and the plan complies with the NHPS High Performance Schools Design Requirements and the State of Connecticut High Performance Building standards.

“We are excited and proud to be a part of this project, the first in our hometown of New Haven,” said Pickard Chilton Principal Jon Pickard in a statement. “The Barack H. Obama Magnet University School will be first and foremost an education and innovation facility, and our design was developed with the needs of both the school’s students and SCSU’s teachers-in-training in mind.”

Pickard Chilton has extensive experience working on both public and institutional facilities, having designed projects such as the Minnesota State Senate Building, the Orville L. Freeman Building and the Emory University Hospital, among others.

The $45 million school is scheduled to open in fall 2019. It is believed to be the first school in New England named in honor of President Obama, and will replace Strong School’s Orchard Street location.