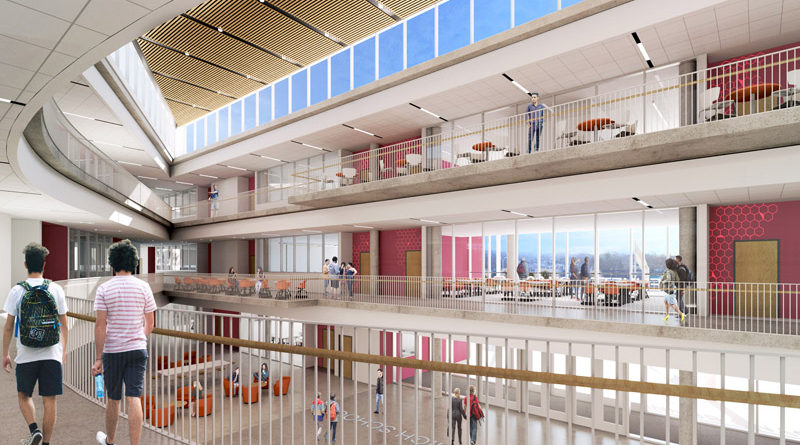 KINGSPORT, Tenn. — Construction of Dobyns-Bennett High School’s new Regional Science and Technology Center (RSTC) is currently underway in the form of a large triangular-shaped structure that will serve as its new entrance.

The $20 million project currently sits in front of the Dobyns-Bennett High School campus and includes a new 75,000 square-foot, three-story, 400-seat facility with a mission to create a culture that inspires innovation through science and technology.

Perkins+Will of Atlanta designed the new facility, and BurWil Construction Inc. of Bristol, Tenn., is serving as the project’s contractor.

“Because of the shape of the existing building there’s a different shape to the rooms, said Steve Trimble, project architect at Perkins+Will of Atlanta. “We have classrooms that can flip and change and be different things as needed.”

The new facility would also raise Dobyns-Bennett’s capacity to support 2,500 students at 85 percent utilization, according to Kingsport City Schools.

“The client really had a vision that they wanted something specific so they really pushed us to create that thing,” said Trimble. “We toured buildings just to get an idea of the design of the buildings.”

Trimble said the buildings he toured together with Kingsport City school officials included other high schools Perkins+Will had completed in the Atlanta region.

For example, Trimble said that there was a tremendous amount of glass used to create an open and transparent façade of the facility. He said school officials benefited from seeing some of the same facades in other Perkins+Will school designs.

“It was important for them to see a building that had a lot of glass and realize that students were not going to be on display like a fishbowl kind of thing,” said Trimble.

Trimble said that one interesting part of the design process for the RSTC was adding on to the existing Dobyns-Bennett hexagon-like pod structure that was built in 1967.

According to the Times News, Dobyns-Bennett was touted as an “ultra-modern high school” with wall-to-wall carpet when it first opened in 1967. However 50 years later the design of having only one window per classroom has given way to a wall of windows that let in natural light according to the design of the new RSTC facility.

“We inverted that relationship and we’ve increased the views out into the mountains beyond so you get a really picturesque view from these classrooms that are higher than they were,” said Trimble.

Construction on the new facility began during the school’s 2017 winter break and is scheduled for completion on May 31, 2019; the facility is scheduled to open in August of 2019.

A report from the Times News contributed to this story.