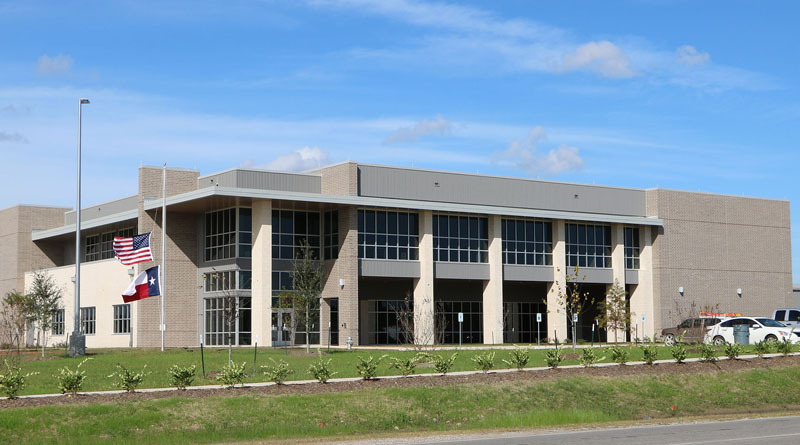 The new tech center in Baytown, Texas, was officially unveiled to the public on November 27. Photo Credit: LAN

The new tech center is part of GCCISD’s $267 million bond program that passed in May 2013. Located in Baytown, Texas, GCCISD is one of the fastest growing school districts in the state. The district projects more than 4,500 new students over the next decade, according to a demographic study. In response to this growth, local voters passed the $267 million bond program. Already, the school district has grown from 21,000 students when the bond passed in 2013 to nearly 24,000 students in 2018.

The 32,400-square-foot, two-story technology center, designed by Huckabee and constructed by Durotech, is situated on an eight-acre tract next to Alamo Elementary School. It showcases 3,900 square feet of training rooms on the first floor, where teachers can learn how to integrate technology and software into their classrooms, and a 2,000-square-foot network operating center with servers on the second floor. It also houses a 1,900-square-foot technology work area, 3,500 square feet of storage space, a warehouse for receiving technology equipment and office space.

“The facility will serve as the “brain center” for the district,” said JP Grom, vice president at Lockwood, Andrews & Newnam, Inc. (LAN), the firm that is serving as the program manager for the bond program. “It will allow GCCISD to store student and teacher data within the district, rather than relying on a third-party data facility. It will also serve as the district’s emergency operations center in the event of a hurricane or other emergencies.”

Other elements of the bond program include three new elementary schools, which opened in 2015, a new transportation center that was completed in 2017, and an agriculture science building that opened in 2018. The bond package also includes additions to four facilities, renovation of STEM labs in five schools and security upgrades. In addition, the bond package has enabled GCCISD to accomplish its goal of retiring $52 million in deferred maintenance.