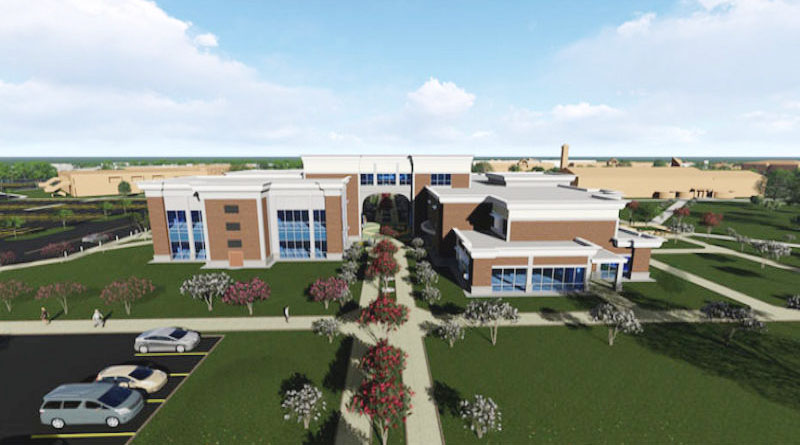 The project will be a Green Building Initiative, with a target goal of Three Globes certification that is equivalent to USGBC LEED Gold Certification.

Construction of the east wing will serve as the first phase of the project and will begin in January, following the abatement and demolition of the existing Mary Ellison Baars Building. The new facility will be a partial three-story steel-framed building and house mathematics, computer science, cyber security, aviation maintenance, advanced manufacturing programs and other high-tech programs. The east wing will be home to the college’s cyber security and mathematics programs.

The cost for the east wing is $13 million. The total cost for the entire facility is projected to be $34 million. A construction start date has not been set for the second phase that will include the west wing of the facility and second-floor connector.

The west wing and second-floor connector will be a total of 46,133-square feet and is projected to cost $21 million. Ajax Building Corp is the project’s general contractor, and Florida Architects designed the facility.

“We badly need the space for our cybersecurity degree program which has quadrupled in enrollment since it was first offered in fall 2016,” said Meadows.

With 15 stackable nationally recognized certifications leading to the associate of science and bachelor of applied science degrees, the new STEM building will be state-of-the-art for high-demand high-wage jobs. Once the entire facility is completed, it will be home to the college’s computer science, aviation maintenance and advanced manufacturing programs.

“We also wanted to lock in the construction costs before Jan. 1. Right now, we have sufficient funding for the east wing with the majority of funds coming from the state Public Education Capital Outlay (PECO) allocation,” said Meadows.

“Realizing the importance of local workforce needs, the Escambia County Commission, the Santa Rosa County Commission and the City of Pensacola also have allocated funds for the project. With leadership and vision, these local stakeholders are to be commended for their support.”

In addition to cybersecurity and math programs, the 25,389-square-foot east wing will house math tutorial labs and office space. The first phase is projected to be in use by May 2020.

The STEM facility will replace the Baars Building (Building 1), which was originally constructed in 1956. The facility was named for the matriarch of the Baars family in recognition of their role in making the property available for the College’s Pensacola campus.

The project will include the demolition of the existing Baars Building and site improvements, such as new utilities, storm drainage systems, parking areas and roadways, including the installation of a new entrance road, which will be initially used for a construction entrance. Additionally, the site will also undergo new hardscaping, landscaping and irrigation.

The new facility will also provide training for 200 to 300 new jobs coming to the region. In addition to housing high-tech programs, the new Baars building will also provide space for a collaborative partnership with an adult learning and support program.

The completion date for the facility is set for October 2019.