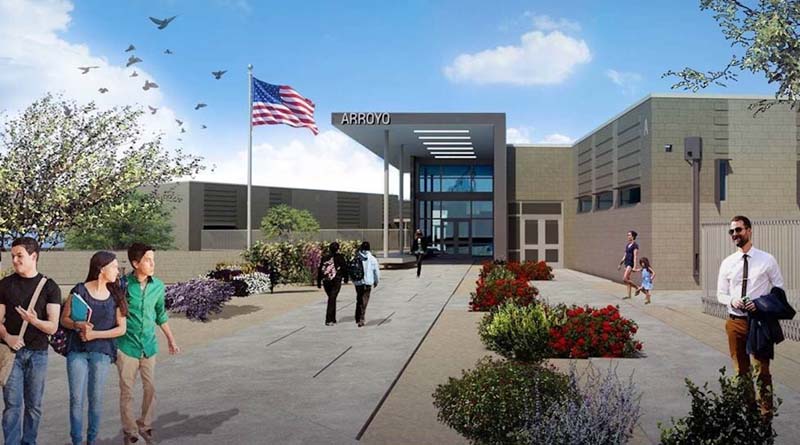 When the project is completed in 2020, Arroyo School will have 74,600 square feet of new facilities—including classrooms, a gym, parking, drop-off area and playfields. Photo Credit: McCarthy Building Companies

The $16.2 million project for the Washington Elementary School District — which is being funded through a 2016 voter-approved bond election — will include 74,600 square feet of new facilities—classrooms, a gym, parking, drop-off area and playfields. Once the new classroom building is completed in July 2020, the remaining buildings will be demolished making way for the construction of new parking and play fields.

“The ceremonial groundbreaking was a great way to celebrate a dream that will soon become a reality,” says Arroyo School Principal Philip Liles.

Mike Horn is project director for the Education Services team at McCarthy.

“We’re honored to work with the Arroyo school community, which values education and being engaged in the renovation of their school campus,” he says. “We look forward to bringing big changes to the campus over the next school year while ensuring the students and staff do not have to endure any major construction-related disruptions.”

BWS Architects is the architect on this project. Established in 1992, Pre-K through 12, higher education, and community projects with an educational emphasis, such as libraries and museums, have historically formed the largest percentage of BWS Architects’ work over the past 27 years.

“We greatly appreciate our partnership with McCarthy Building Companies and the Washington Elementary School District as we bring our collective vision to life and create long-lasting pride for the Arroyo school community,” says BWS Design Principal Frank Slingerland.

“We believe in creating enriching learning environments where students and educators can discover and grow together.”

Adds Principal Liles, “Our students, staff and neighbors have been looking forward to our newly constructed school since the day our community passed the bond in November 2016. We’re excited for construction to begin, and we look forward to continuing the great learning that takes place every day at Arroyo in our new school in 2020!”