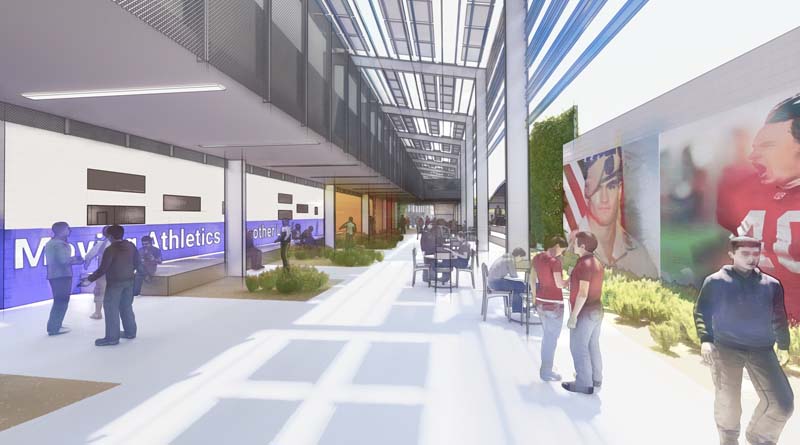 PHOENIX, Ariz.—Construction has begun on the new Balsz School District’s Pat Tillman Middle School, a middle school bearing the name of one of Arizona’s and the nation’s most notable and revered American heroes.

In addition, a new sports tunnel will be constructed, celebrating and connecting the sports fields to the school. Sitework will include the build-out of both sports and community fields with perimeter security that allows for safe and secure student and community access. The building also incorporates energy efficiency upgrades to allow the school to be more operationally efficient over time.

“Our vision for Pat Tillman Middle School is to create the finest learning environment in the Valley, one that truly honors the Tillman legacy,” said Dr. Jeffrey Smith, superintendent of the Balsz School District.

“Pat embodied everything it is that we want to instill in our students—bravery, patriotism, commitment, selflessness—and these fundamentals will very much be a part of the core culture at Tillman Middle School.”

Located at 4309 E. Belleview in Phoenix, the school offers a traditional academic curriculum with expansive elective, after-school and sports offerings. The school will remain open for the 2019-20 school year, while construction is underway, and continue to serve the current student population of approximately 720 students in grades 6 to 8.

The school’s robust elective offerings include an Elite Sports Training pathway, a STEM program focusing on coding, rocketry and robotics, and a Digital Arts program that exposes students to video production, multimedia design and computer graphics. Students at the school will also benefit from the Advancement Via Individual Determination (AVID) initiative, which seeks to bridge the achievement gap between economically disadvantaged students and their peers.

Construction will be completed in time for the 2020 school year. Final construction completion, which includes all site work and miscellaneous upgrades to existing structures, is slated for October 2020.

“It’s been a privilege to work with the Tillman school community on this major renovation of their school campus, which will enhance the educational and STEM learning experience for current and future students,” said Mike Horn, project director for the Education Services team at McCarthy.

“We look forward to bringing these highly-anticipated and significant changes to the campus over the next year and are particularly honored to be part of acknowledging Pat Tillman for his service to our country and his athletic achievements as the namesake of the school.”

Added Pam Loeffelman, FAIA, DLR Group, “We are honored to provide a new home for Tillman Middle School. The entire team of educators, administrators, architects, engineers, contractors, students and the community at large worked collaboratively to co-design a school that enables teachers and students to aspire to the Tillman spirit and embraces the community where it resides.”

Originally built and opened as Balsz Elementary School in 1964, the Tillman family granted Balsz School District permission to use the Tillman name in early 2018. The school, home of the Warriors, is located only a few blocks from Arizona State University’s Sun Devil Stadium, where Tillman first made headlines on the football field.