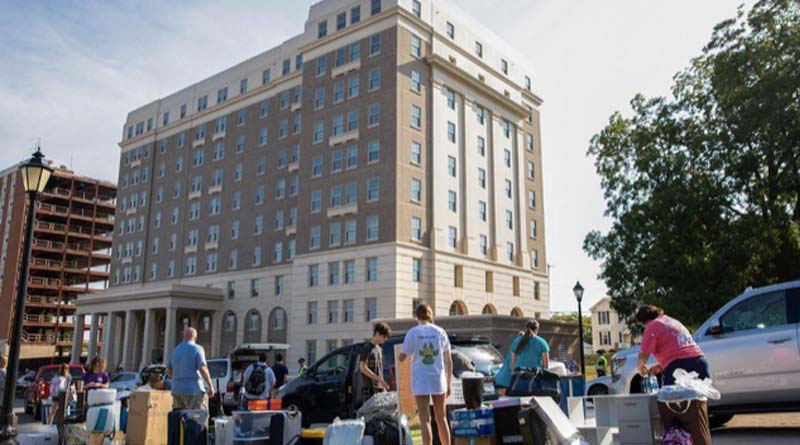 The newly re-opened dormitory building, Frazer Hall, is one of a pair of formerly drab midcentury structures right at the front door of Longwood’s campus, where it meets the main street of surrounding Farmville. The second building, Curry Hall, is now starting the carefully phased renovation process, which also includes landscaping and redesigned streetscapes that better tie the University to the community around it. New facades feature wider windows and more contextual brickwork. Interiors are redesigned to allow for additional space and a greater number of students — an important consideration for a school whose population is anticipated to grow 30% in the next five years.

“Updating Curry Hall and Frazer Hall is a key step in the implementation of the master plan, and one the University identified as an early priority while we worked together to develop a long-range vision,” said Cooper Robertson partner John Kirk, AIA. “The primary goal is to better weave the existing campus together and connect it to the surrounding Farmville community. These two buildings are visible from everywhere in town, and the renovation offers an opportunity create a more welcoming and contextual presence at the University’s front door by forming handsome icons on the local skyline.”

Cooper Robertson is also shepherding the design team for the building projects, which includes the firms VMDO, Little Diversified and Franck & Lohsen.

The residential building upgrades are just the beginning of a series of bold moves proposed in Cooper Robertson’s master plan, called “Place Matters.” Adding new campus activities and furthering the campus-town connection, the school’s baseball and softball stadiums will be relocated to downtown Farmville, with all field sports to be consolidated at the south campus. Building on the university’s existing character, a new, garden-like pedestrian connection to the Moton Museum will be installed along with a Performing Arts Center and a multi-purpose hall.