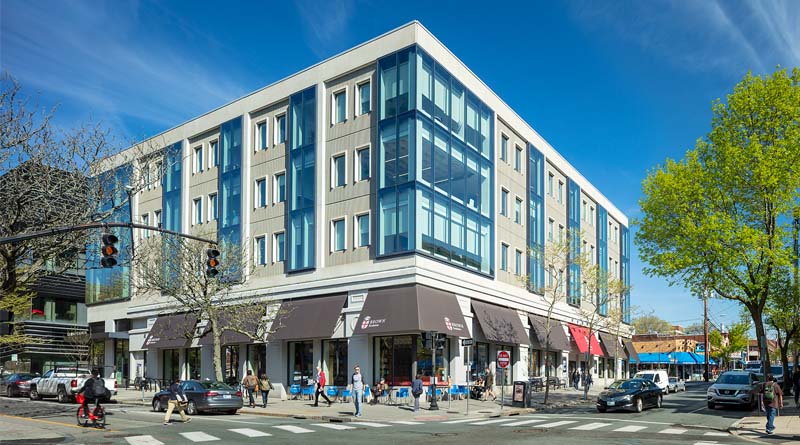 PROVIDENCE, R.I.— Renovations at 164 Angell Street, a Brown University building in Providence—formerly known as the Brown Office Building—have been completed.

Shawmut Design and Construction, a construction management firm based in Providence, and with locations across the country, was the general contractor on this approximately $25 million project. Done in partnership with the Architecture Research Office, work included gutting the second, third and fourth floors of the 1970 building and transforming the space into a vibrant multidisciplinary hub.

“Our team was honored to revitalize such an important Brown University building to create a contemporary, state-of-the-art space for interrelated academic groups,” said Ron Simoneau, vice president at Shawmut.

“Our long-standing partnership with Brown University resulted in a coordinated approach that upholds the original design of 164 Angell Street, while promoting greater synergies and opportunities for collaboration.”

The nearly 50-year-old building had been characterized by its narrow and dark interiors, but is now highlighted by a design that focuses on natural light.

The renovated space includes state-of-the-art conference rooms with updated technology and video conference capabilities. The building’s systems and structure were overhauled, including the replacement of approximately 40 percent of the precast façade with curtainwall, new mechanical, engineering and plumbing systems, as well as elevator systems, and an updated enclosed lobby space off Angell Street.

Not only did the extensive renovation improve the interior design and work environment for its occupants, but several centers, institutes and departments are able to move into the same building. 164 Angell Street now houses these entities from across the Brown campus: the Carney Institute for Brain Science, the Center for Computational Molecular Biology, the Data Science Initiative, the Department of Education, and the Annenberg Institute for School Reform.

The Brown Bookstore, located on the ground, mezzanine and basement floors remained operational throughout the project, requiring careful planning and coordination.