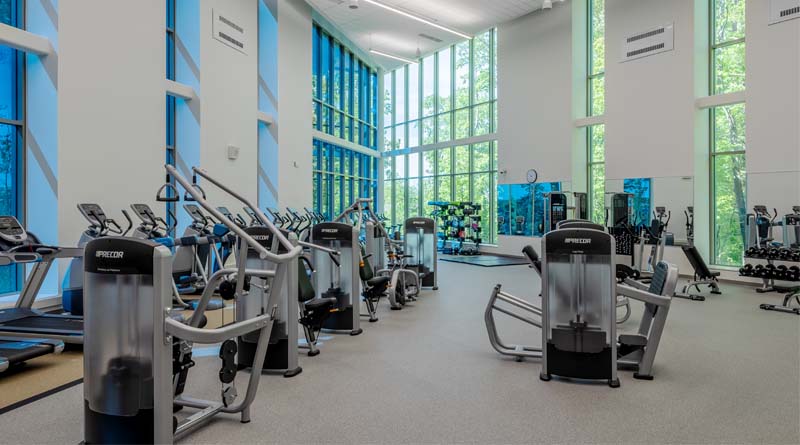 Smart windows, like the ones recently installed at the Hackley School in Tarrytown, N.Y., provide natural daylight entry without the added heat and glare. Photo Credit: View Smart Windows Optimize the Benefits of Natural Daylight

In the 1960s, school design entered what might be considered its “Dark Ages.”

Tasked with building schools with large heating and cooling systems, engineers complained that expanses of glass and high ceilings were a waste. Researchers, believing views of the outdoors were distracting to learning, decided daylight wasn’t important in education. By the end of the 1970s, most schools were designed as a collection of generally dark, often drafty classrooms and lecture halls.

Today, school design is having a renaissance. According to a recent survey, green buildings—that is, buildings that help improve student health, academic achievement, and the environment—account for more than 32 percent of all construction projects in the United States. That percentage is even higher in the education sector, where more than 50 percent of all new construction projects are going green.

Building features that once seemed cutting-edge or risky to a long-term project have become the norm. These include low flow/zero flow plumbing fixtures, LED lights, and even geothermal energy generation. This evolution is set to continue as new and emerging technologies are making their way into school buildings.

One of the basics of green buildings is to start from the outside in—improve the building before you tune the space. One of the most important design elements of the sustainable building envelope today is the smart window. Smart windows predictably change their tint based on cloud cover and the angle of the sun, maximizing daylight while reducing heat and glare. Beyond the energy savings smart windows can provide, their impact on students is profound.

According to one report, more than 50 percent of university professors who increased access to natural light and views in their classrooms saw a jump in student engagement. A recent study by Dr. Alan Hedge, a professor in the Department of Design and Environmental Analysis at Cornell University, showed that natural light can reduce eye strain by 51 percent, headaches by 63 percent and drowsiness by 56 percent—dramatically improving health and productivity.

Freed from the dark ages, education-oriented architects are again designing with windows. Unfortunately, traditional windows also amplify the sun’s energy like a greenhouse. Teachers are limited by the time they can seat their students near these windows before heat and glare start to make them tired and uncomfortable.

Thankfully for many universities today, traditional windows are no longer the only option.

At East Carolina University in Greenville, North Carolina, building managers recently invested $160 million to replace the main campus’ nearly 50-year-old student center. As part of ECU’s vision to embrace innovation as an educational foundation, the university’s architects chose to install more than 24,000 square feet of smart windows in the center’s common areas and office space. “The smart windows are so important,” said Dean Smith, the director of student centers at ECU. “The connection to the outside environment helps make this place feel more open to everyone.”

Adia Craig, a student at ECU, said she’s noticed more of her peers studying in the student center since the smart windows have been installed. “It’s a clear benefit,” Craig said of the smart windows. “Nobody wants to study in a hot space.”

Many colleges and universities are catching on to this top sustainability and student performance trend. Along with ECU, View’s smart window technology has been installed at Duke University, Georgia Tech, Arizona State University, Colorado State University, and the University of Massachusetts at Amherst.

This university activity is in addition to the libraries, museums, and high schools that have incorporated smart windows into their building design. One recent example is the Hackley School in Tarrytown, N.Y., where smart windows provide unobstructed views of the surrounding wooded landscape. It was recognized as the best K-12 Education project in New York by Engineering News Record.

Green buildings are not only healthier for their occupants, but also the environment. Smart windows improve a building’s energy efficiency by up to 20 percent and help downsize heating and cooling systems. After the San Francisco International Airport installed View smart windows in its Terminal 1, it saved $900,000 in ventilation and tens of thousands of pounds of CO2 emissions per year.

Environmental performance is becoming increasingly important to future college students. More than 2 million students in the United States apply to college every year and, more than ever, these prospective freshmen are taking a hard look at which schools put sustainability—including a healthy learning environment—first.

More than a third (37 percent) of the 120,357 freshmen that responded to a survey by UCLA’s Higher Education Research Institute said that being “involved in programs to clean up the environment” was “essential” or “very important” to them.

That finding is bolstered by the results of the Princeton Review’s 2019 College Hopes & Worries Survey. Almost two thirds (64 percent) of nearly 12,000 prospective students surveyed indicated that information about a school’s commitment to the environment might impact their decision to apply to or attend the school. The Princeton Review’s annual guide to “green colleges” now gives 399 institutions a green star.

Sure, prospective students could rely on such a list. But just imagine how much more compelling a school might seem if they were to tour a lecture hall, dorm room, or student center that had been designed with their health and wellness in mind: what feelings of excitement, even school pride, a glimpse through a simple window might stir.

Dr. Tinianov’s 25-year career has been dedicated to product innovation and commercialization in the field of energy efficiency and building technology. As View’s Vice President of Industry Strategy, he leads its value-based product strategy and industry engagement.