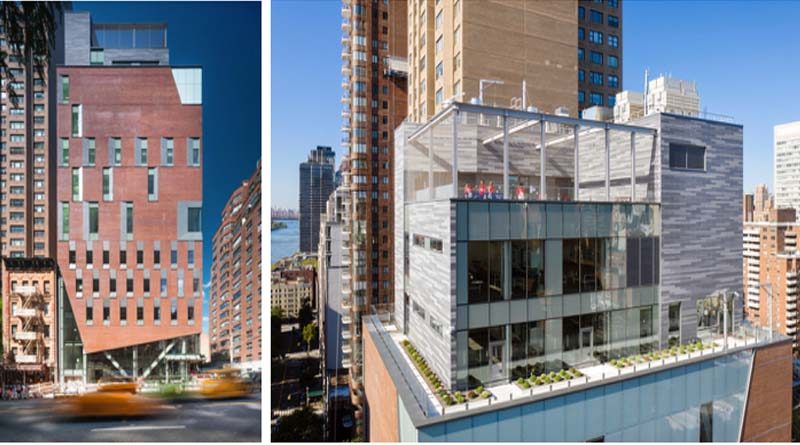 The addition of an 83,500-square-foot building to the Brearley School in Manhattan has been completed. Photo Credit: Nic Lehoux

NEW YORK CITY— The addition of an 83,500-square-foot building to the Brearley School in Manhattan has been completed.

The Upper East Side K-12 independent school, which, until now, had resided in its original purpose-built building since 1929. The architect was KPMB Architects and EW Howell served as construction manager.

The new facility is located on a 100-by-75-foot lot and contains 12 floors with various activity spaces stacked upon each other – from art and science classrooms to a 600-plus-seat auditorium – with interactive and sustainable elements incorporated throughout the building, including a rooftop garden with a rainwater collection system. The cost of the project has not been disclosed.

The project has been designed from the inside-out, based on programmatic needs, and from the outside-in, resulting in an academically dynamic facility held together architecturally with a masonry wrapper that unifies these disparate program elements while addressing the character of the local neighborhood.

The new facility blends into the design aesthetic of the Upper East Side with exterior brick masonry, yet still defines its own identity with refined, Roman format iron-spot brick for texture. The brick not only responds to the client’s wish to “not be just another all-glass building,” but also responds to energy improvements required of future buildings.

Elements of the facility are integrated into student education, such as a visible, natural ventilation system that students are involved in engaging and that allows for cooling supply in warmer seasons without the use of mechanical air conditioning. On the rooftop terrace, science students have access to an experimental garden with a storm water collection apparatus that connects with the run-off of higher roofs to benefit the greenery.

A gathering space for performances and events, the school’s auditorium incorporates a flexible floor that converts from raked seating for up to 600, to a flat floor accommodating 222 for school galas – all with the help of four independent floor platforms that automatically move vertically based on preference. For maximum acoustic effect, nine-wood wall and ceiling panels surround the audience while hiding technical theater equipment.

KPMB will also soon be renovating the existing Brearley facility so it’s consistent with this new building.