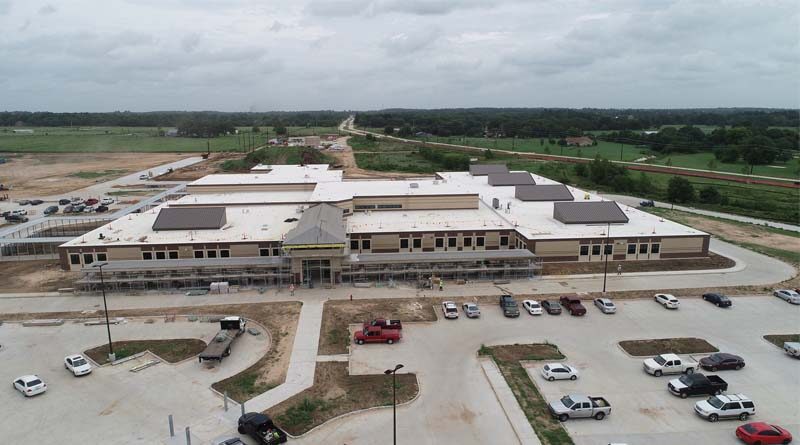 Tomball, Texas—Several projects in the Tomball Independent School District’s $275 million bond program are moving forward, with two of the projects—Grand Oaks Elementary School and a new agricultural science project center—scheduled to open in August. Tomball is part of the Houston metropolitan area.

Tomball ISD is considered one of the fastest-growing districts in Texas. The bond package provided funds for numerous new facilities, including an elementary school, a junior high school, a district-wide athletic complex, a natatorium for Tomball Memorial High School, and an agricultural science project center for Tomball High School.

“We have faced various challenges from delays in land acquisition to changes in building code regulations after Hurricane Harvey to issues related to county building permits,” said JP Grom, vice president of Lockwood, Andrews & Newnam, Inc. (LAN), which is serving as the program manager.

“Despite these challenges, we are on course to completing several major projects over the next 14 months. These facilities will serve Tomball ISD students for the next 50 to 75 years and provide them the environment and infrastructure needed to succeed in the 21st century.”

Added Tomball ISD Superintendent of Schools Dr. Martha Salazar-Zamora., “We are excited about the progress of our projects and for the opening of Grand Oaks Elementary and our agricultural science project center in August. It has been wonderful partnering with LAN during this time as our projects continue to run smoothly despite many unforeseen challenges we have faced along the way.”

The three projects, which broke ground in May 2019, were designed by PBK Architects and are being constructed by the Gilbane Building Company. Infrastructure support for the entire complex will be provided by new water and wastewater treatment plants owned by the district.

The approximately $24 million Grand Oaks Elementary School will relieve Wildwood and Lakewood Elementary Schools. The 112,186-square-foot, single-story facility will accommodate 900 students from grades K-4. The new elementary school is scheduled to be completed in August.

The $43.26 million Grand Lakes Junior High School will relieve Willow Wood Junior High School. The 228,346-square-foot, single-story building will house 1,500 students in grades 7 and 8. The school will also have its own football stadium for track and field events, as well as a football and soccer practice field. The new junior high school is scheduled for a July 2021 completion.

The $37.29 million new district-wide athletic complex will serve Tomball ISD’s football, soccer, arts and band programs. Scheduled to be completed in May 2021, the stadium will seat 10,000 spectators with a 12,200-square-foot press box and accommodate 3,000 parking spaces. At the north end of the stadium is a two-level, 25,000-square-foot community facility with a conference center, sports locker/dressing rooms, athletic training, kitchen and administration areas for sporting events. The current football stadium has 7,500 seats and 2,000 parking spaces.

The district is also building a new natatorium on the Tomball Memorial High School campus. This 26,000-square-foot facility will house a 25-yard stretch pool with an 8-lane competitive swimming area and a diving area, separated by a floating bulkhead. Support spaces include locker rooms for athletes and coaches, a training room, offices and associated equipment rooms. Stantec Inc. is the architect and Gamma Construction Company is the general contractor. The $10.56 million natatorium will be completed this December.

A new agricultural science project center is also under construction at the Tomball High School campus. This center will house an agricultural barn and support facilities for the school’s agricultural programs, and an instructional nature center with two classrooms measuring 900 square feet each. The $4.97 million facility, which was designed by VLK Architects, will be completed in August. Sterling Structures, Inc. is the project’s general contractor.

In addition to the new facilities, the bond program includes an expansion project that will increase Tomball Memorial High School’s capacity from 2,250 to 3,000 students. The expansion, totaling 155,000 square feet, will increase the number of classrooms, science labs, Center for Adaptive Technology in Education (CATE) labs, gymnasiums and provide more space for performing arts and dining areas. Approximately 54,000 square feet of athletic and performing arts areas and CATE instructional areas will also be renovated. Texas-IBI Group, Inc. is the architect and ICI Construction, Inc. is constructing the project. The $36.5 million project will be completed next June.