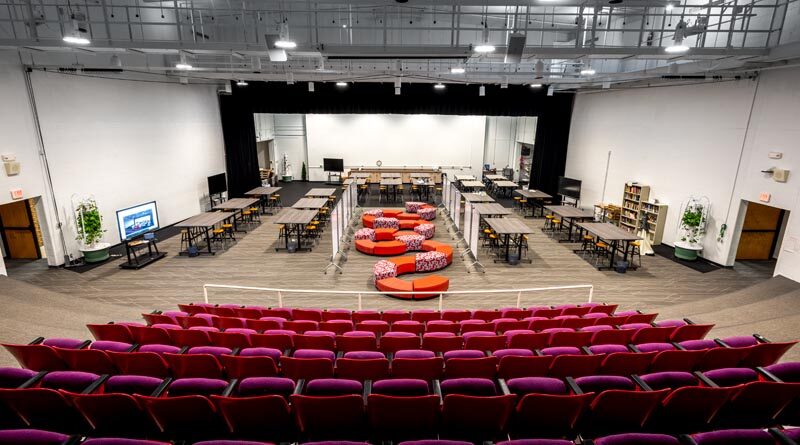 The extremely flexible space shows off areas for solo work as well as small- and large-group activities and presentations. Photo Credit: SHP

When there’s a steady flow of educators visiting a school to learn about a specific program that’s flourishing there, you know there’s something special going on. That’s exactly the case with the Synnovation Lab at Sycamore High School outside of Cincinnati. It’s a one-of-a-kind space designed specifically to facilitate personalized, project-based learning. Requests for tours are so frequent that I have jokingly suggested that the school should install a turnstile.

The Synnovation Lab—a portmanteau blending “Sycamore” and “innovation”—occupies what was formerly the school’s theater. The space is uber-flexible, providing areas for solo work as well as room for small- and large-group activities and presentations.

Inside the Synnovation Lab, core content teachers and their assistants coach 100 students through self-led lessons and projects. There are no schedules and no bells. Each student progresses through the day at his or her own pace.

First opened in the fall of 2018, the Synnovation Lab became an instant hit among teachers and students alike. The teachers enjoy focusing on specialized content and providing individualized instruction to degrees that just aren’t possible, or practical, in traditional classroom settings. For their part, the students who opt into the program report feeling more empowered and taking a greater interest in their education. And why wouldn’t they? They get to anchor their studies in topics that naturally intrigue and motivate them.

The Birth of a Bold Idea

The most devoted advocate and champion for the Synnovation Lab was Dr. Ashley Warren, the assistant principal at Sycamore High School. I remember her telling me about some of the amazing work—conducting science experiments, writing scholarly articles and more—that she and her colleagues witnessed some students doing after school and that had nothing to do with a particular class. This academically rich work was entirely driven by students’ personal interests and passion projects. Dr. Warren and her colleagues also noticed that some of their students needed a bit more flexibility on timing. If given just another 10 minutes to finish a quiz, for instance, or another week to complete a major project, these students would often absolutely nail the assignment.

Dr. Warren and her colleagues came to see that the structured, bell-driven nature of traditional learning was masking the true abilities and talents of some students. These educators found themselves asking such questions as: Why can’t academically relevant work tied to personal passions happen within school versus outside of it? Why can’t some students operate on a less structured schedule? Why must learning be as it mostly has been for a century or more?

Hence, the idea for the Synnovation Lab was born.

Dr. Warren’s passion for this project was a joy to witness. As was the way Sycamore Community Schools’ superintendent, Frank Forsthoefel, its school board and other educators rallied behind the concept. It certainly helped that the district had already embraced some personalized learning approaches and had already invested in building a robust tech infrastructure to accommodate the greater digital demands of this educational approach.

This collective enthusiasm, which was truly contagious, really energized me and my team. We sought to design a remarkable learning space befitting the bold vision and bottomless energy behind it.

A Space Worthy of Its Name

A concept as interesting as the Synnovation Lab deserved a space as equally innovative. Architecturally speaking, however, this was a challenge. The program was going to be based in what was then a 7,000-square-foot theater, so my team and I had to contend with sloped floors, a raised stage and no windows. It certainly wasn’t the blank slate with which we architects prefer to work.

There were two foundational principles behind our Synnovation Lab design. The first was interaction. After all, the practice of personalized learning leans so heavily on the “magic” that happens between and among students and teachers. (It’s telling that during the COVID-19 school-at-home period, Dr. Warren said that she and her fellow Synnovation Lab teachers had no problems communicating effectively and efficiently with their students since they were already accustomed to doing so long before the pandemic hit.)

Our second design principle was flexibility. Personalized learning inherently requires malleable spaces that can morph to meet the needs of various learners in any particular moment. The Synnovation Lab’s design needed to accommodate solo, quiet work for, say, reading and research, as well as more active, collaborative work for making and experimenting.

With these two principles as our guide, we designed the following features into the Synnovation Lab:

The initial investment in transforming the theater into the Synnovation Lab was about $300,000, which we and the district deemed quite reasonable given the size of the space and the scope of the transformation. An additional $500,000 in future improvements were later identified in a comprehensive, district-wide Facilities Master Plan that garnered overwhelming voter support last year.

The Synnovation Lab is just what it’s advertised to bea lab. Personalized learning is still relatively new when considered in relation to the traditional education approach, which in some respects has remained largely unchanged for a century. There’s still plenty for educators to figure out and refine.

This is exactly why Dr. Warren often refers to the Synnovation Lab as a start-up. As she put it to me: “Personalized education is all about giving students what they need, but this raises questions and challenges regarding how, exactly, you come to know what each student needs.”

She often says that the Synnovation Lab is, like a start-up, all about iteration and experimentation—what she calls “failing forward”—guided by best practices and the voice of experience. “We’re transparent with the kids that we’re trying something new, that some things will work and others won’t—and that’s OK.”

That’s a valuable lesson in and of itself.