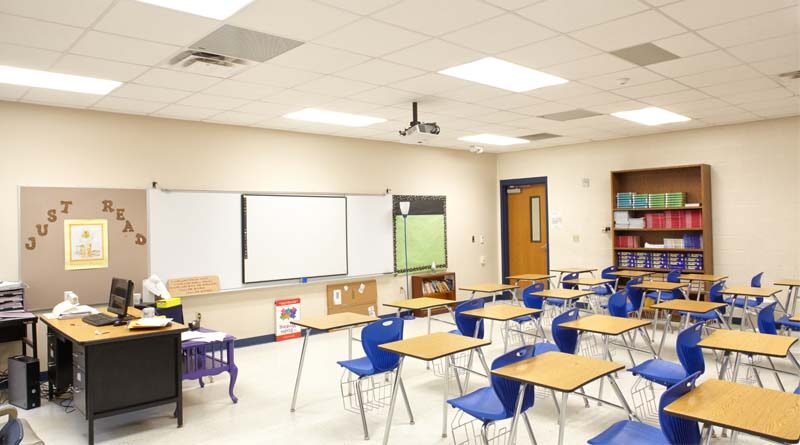 Ever since Thomas Edison successfully commercialized the incandescent lightbulb more than a century ago, artificial lighting has become a critical technology that facilitated the modern civilization through offering sufficient light level for indoor activities. LED lighting then brought financial and sustainability benefits by significantly reducing lighting energy consumption through increasing energy efficiency over the past decade. Now the history of lighting is entering its next age characterized by human-centric lighting (HCL) that is expected to vastly expand the impact of lighting on human health and wellbeing. For schools, that means the most important constituents—students and teachers—will not just be visually receiving lighting but may also benefit from it like never before.

HCL aims to enhance the biological health and emotional wellbeing of people through advanced capabilities such as flicker-free, dimmable and color tunable or circadian lighting. It has been gaining recognition since the term first emerged around 2013 as LED and lighting control technologies started to make it possible for commercial applications.

An obvious and persistent hazard of artificial lighting that HCL aims to remove is flicker. Flicker occurs as a result of modulating the current to artificial light sources, in particular fluorescent, which has been the primary lighting choice for classrooms since the 1950s. Flicker has shown to cause headaches, migraine, eye strain or fatigue, particularly for photosensitive individuals or those with scotopic sensitivity syndromes that hamper perceptual processing and reading. With quality LED lighting, flicker can be largely removed, so much so that it could be considered “flicker-free.”  UL (Underwriters Laboratories) provides a “Low Optical Flicker” certification to qualify LED lamps and fixtures that “meet optimal flicker thresholds for verifiable lighting comfort,” assuring schools can make lighting choices with optimal flicker performance.

Another significant benefit of HCL is circadian lighting, which alters the color temperature and intensity of lighting by aligning our bodies with circadian rhythm. Circadian rhythms are those biological, mental and behavioral changes that respond to light and darkness in a daily, 24-hour clock. In 2017, three scientists won a Nobel Prize for discovering the gene (which they aptly call “timeless”) and the molecular mechanisms that control human circadian rhythm. They showed how light helps humans synchronize with the clock, further validating the working of circadian rhythm.

In the classroom, producing light with cooler, bluer color temperatures and higher intensity, mimics the sun’s daylight quality that induces dopamine, endorphin and cortisol while suppressing melatonin, which can promote higher visual acuity and mental focus, according to several studies. Towards the end of the day, lowering color temperature to more yellowish and dimming the light mimics the sunset spectrum, prompting calmer moods by inducing melatonin.

Since average Americans spend close to 90% of their time indoors, constant exposure to artificial light is one of the key factors that affects sleep. Sleep is inextricably linked to cognitive development, so schools have a vested interest in promoting healthy sleep. Research published in Brain and Cognition has demonstrated that the frontal lobe, which enables rational thinking and critical decision making, takes deep sleep to accomplish the neural maturation required and studies have also shown that sleep sets in motion the process of memory consolidation. Students exposed to circadian lighting during learning times should be able to sleep better at night, according to research in Neuroendocrinology Letters, which can be a powerful tool for schools. In fact, studies have demonstrated significant improvements in learning efficiency and test scores under circadian lighting, including a study of elementary school students conducted by University of Mississippi showing a 33% increase in performance under circadian lighting compared with the control group.

Notably, there’s a double downside for students with Autism Spectrum Disorder (ASD) learning under flickering lights that also harm their circadian rhythms because their circadian rhythms are already weaker. According to research published in the Journal of Neurodevelopmental Disorders, it’s as if the day and night are far less bright and dark, respectively, with a flatter profile of melatonin secretion across 24-hour periods. Children with ASD are also more susceptible to extreme visual sensitivity where sharp peaks in light can jumble the signals to the brain. It can result in dizziness, headaches, nausea, and difficulty concentrating, according to International Journal of Clinical and Health Psychology.  HCL may be particularly instrumental in helping to improve physiological health and behavior in students with ASD.

Additionally, advanced HCL capabilities such as circadian lighting requires lighting controls, which traditionally have been notorious for being inaccessible in existing buildings due to system complexity and prohibitive cost. For HCL to be massively impactful, it needs to be simpler to install, budget-friendly, intuitive to use, and easy to maintain. Fortunately, with the latest developments in LED lighting systems that incorporate advanced electronics, communication and software technologies, schools can now benefit from HCL solutions that leverage on existing fixtures and AC powerlines without the need of running new wire, introducing potentially insecure wireless communication protocols, or replacing the fixtures that could last multiple decades. By replacing just the lamps and switches, schools can gain HCL benefits at a fraction of the time and cost while maximizing long-term sustainability by eliminating the solid waste from replacing the fixtures. There has never been a better time for schools to boost and transform health and performance of students and teachers by adopting HCL.